Greenland, quick, before it melts (by Carolyn)

Thursday August 25
We've now flown across Greenland four times and finally this trip gave us significant clear skies to observe the massive Greenland icecap! It was especially exciting since this was the flight to capture our northern most waypoint at 75 degrees north from 27,000 feet above. We saw the high elevation glacial lakes, and massive rivers of ice streaked with brown sand and stone. Multiple fiords spit icebergs into the sea. The coast was rugged and looked like bare granite, which is basically what it is. 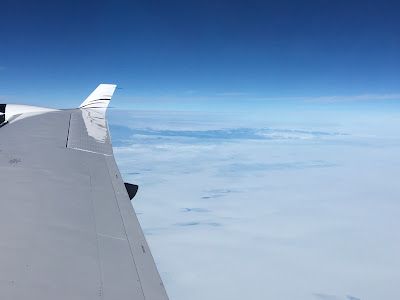 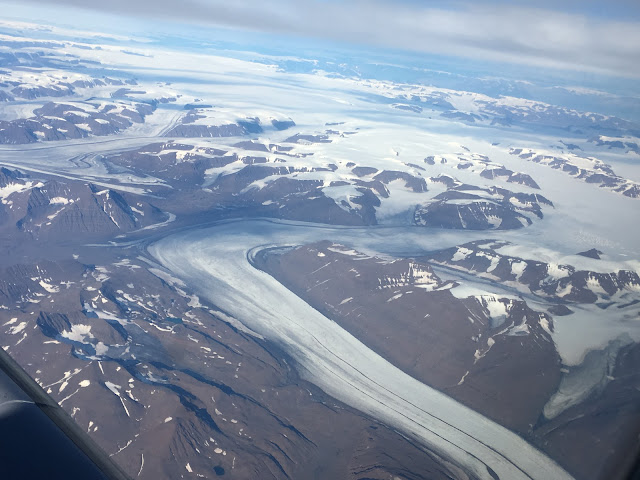 We landed in Ilulissat, a booming community of 4,600 people and 2,300 sledge dogs on the west coast of Greenland. There are new homes, hotels and guest houses under construction everywhere as people move away from remote fishing settlements into the "urban" area. The brightly colored buildings looked like candy spilled on a gravel driveway. Like Faroe Islands, Greenland is another semi-autonomous region of Denmark. Half the people we've met who work here are Danes, fair skinned, tall and well educated. The other folks include imported Filipinos and the native Innuit. English is understood if not spoken by many, but the more common languages are Danish and German. 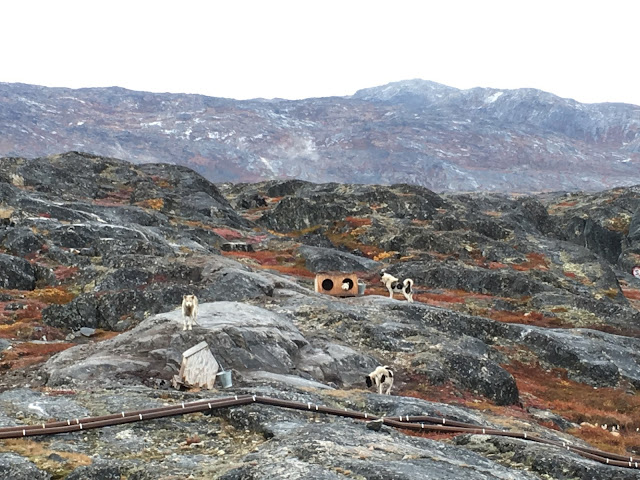 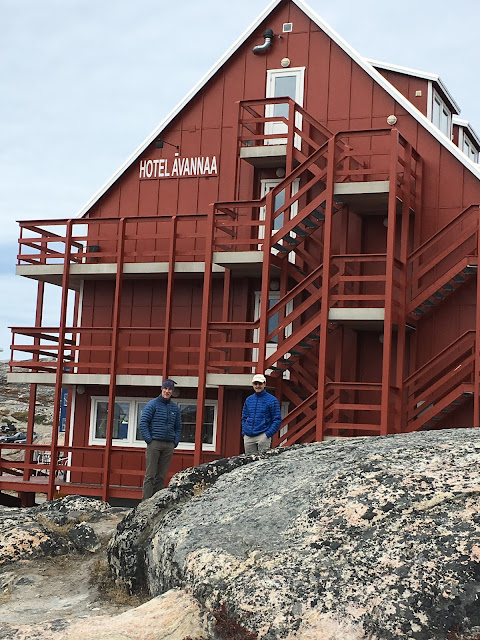 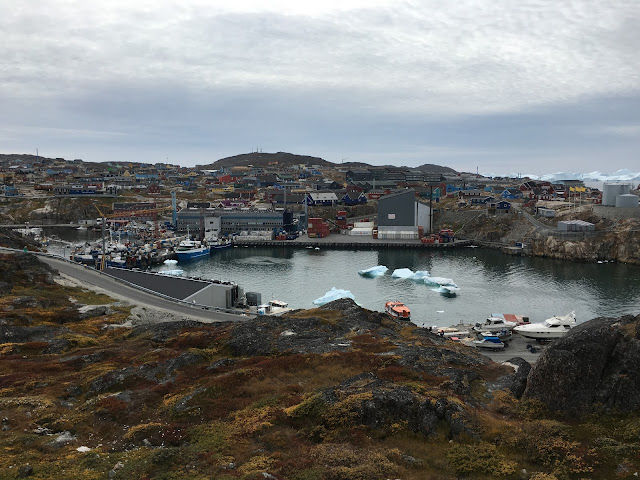 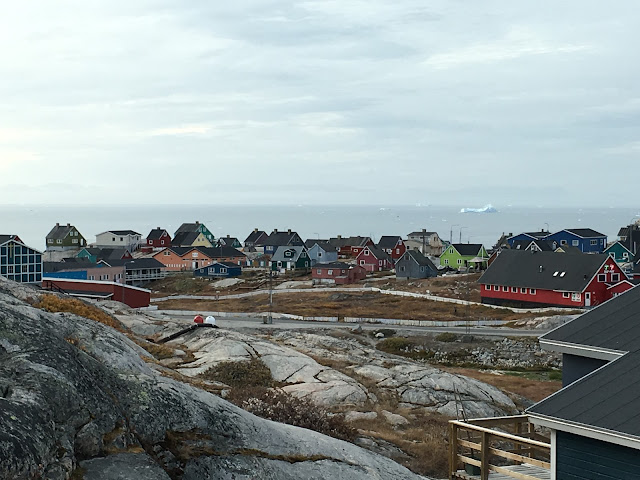 The day was gorgeous and sunny and after checking into Hotel Avannaa we walked into town to get a snack at the Cafe Iluliaq. There are several gift shops clustered around the main intersection and the local crafts seem to be primarily rain deer antler carvings and seal skin clothing, which can't be brought legally into the U.S. 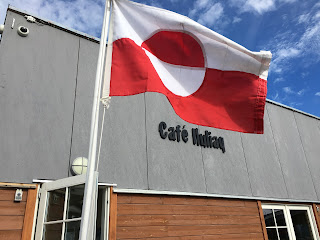 Out hotelier recommended Restaurant Marmartut for dinner and even with a small menu, we were not disappointed. Giuseppe had the tapas plate which included whale jerky, seal stew, rain deer heart, and several kinds of fish. Vegetarians would have it hard here since there aren't a lot of vegetables. 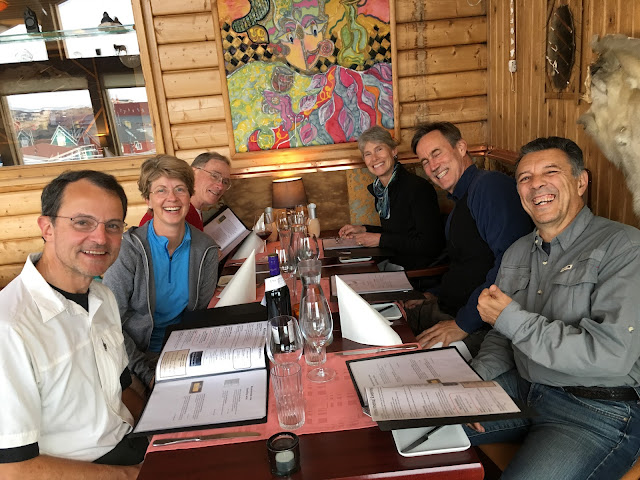 August 26
It's going to be clear and sunny today, but the chill never leaves as the wind blows across icebergs in Disco Bay. Ilulissat means "icebergs" in the native language which probably is a better name Jakobshavn, which the Europeans gave it in 1750. We struck out for a series of hikes along the yellow boardwalk trail and the blue trail to get closer to the Ice Fjord. 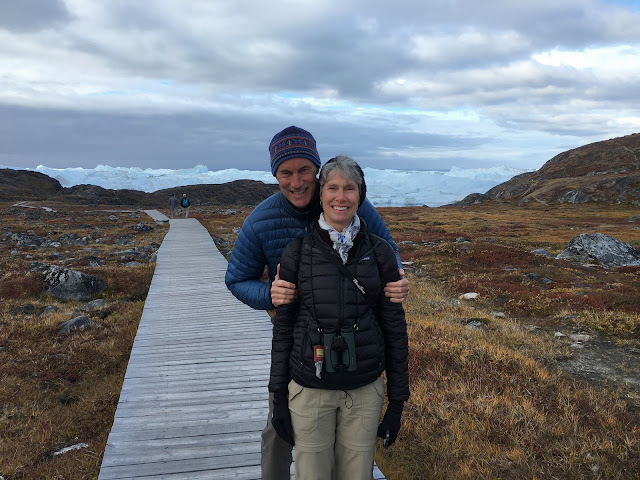 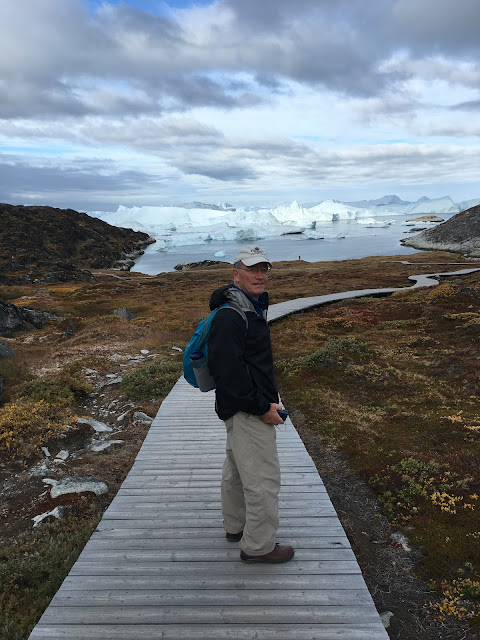 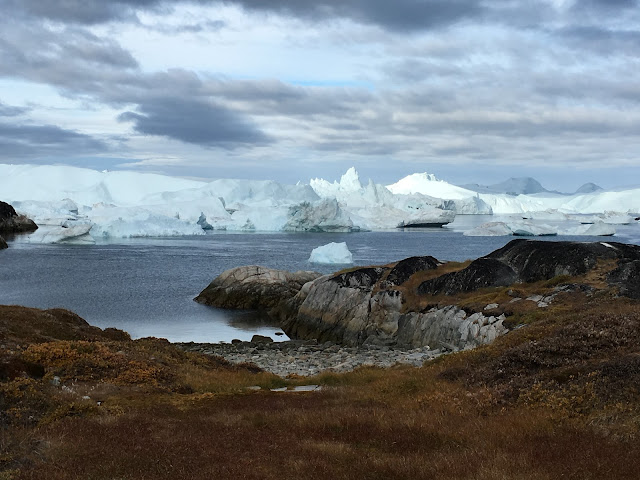 The hikes were glorious and every view more breathtaking than the last. We saw groups of preschool children learning outdoor lessons on local customs, geography and natural history. We hunted for geocaches, looked for birds, admired dozens of diminutive native plants and found the challenging ecosystem to be dramatic and beautiful. 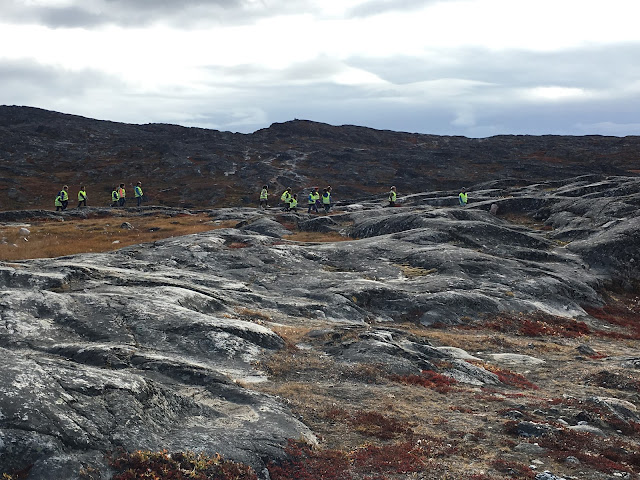 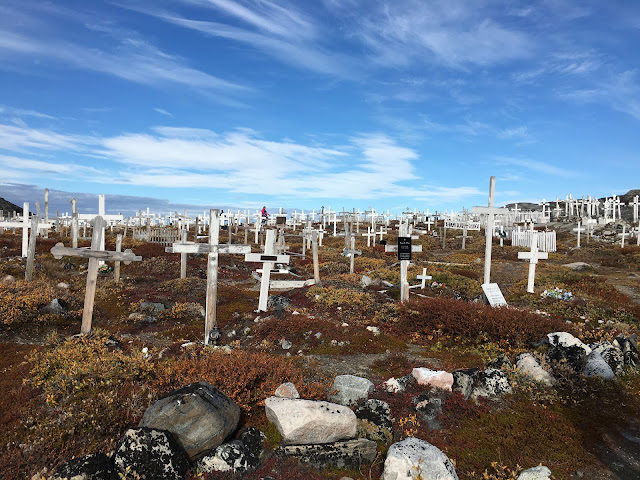 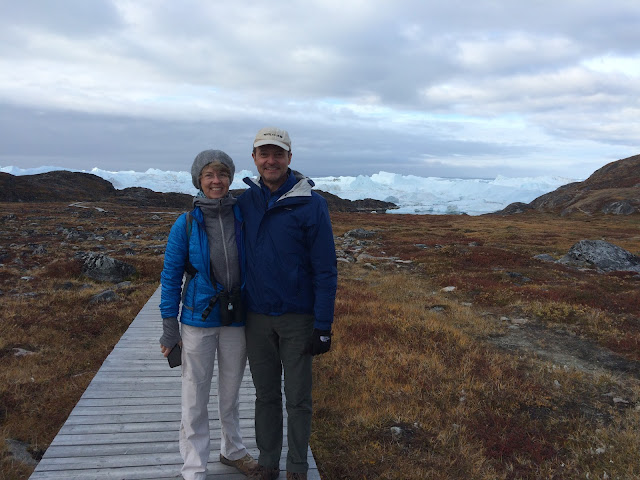 Our afternoon got even better when we were lucky enough to book a boat tour with Ennis on his pristine Ilulissat Water Taxi. He limits his excursions to six people and is able to customize the experience to meet every need. We bundled up and cruised around massive 'bergs, learning much about the local economy and his entrepreneurial plans. 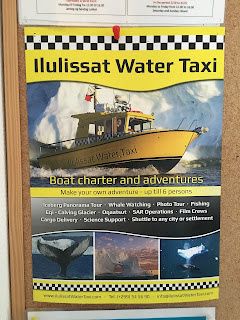 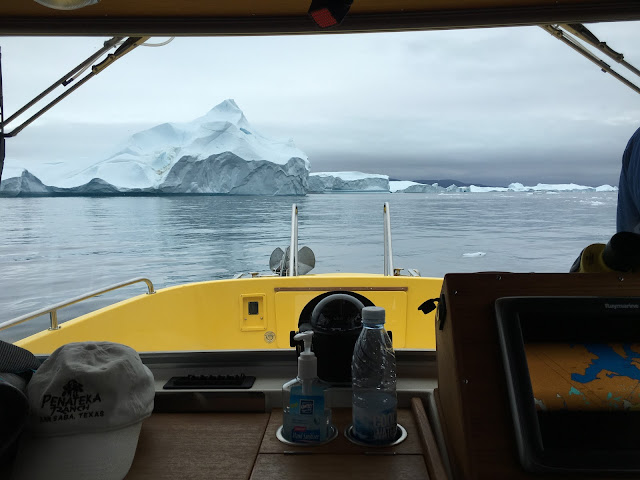 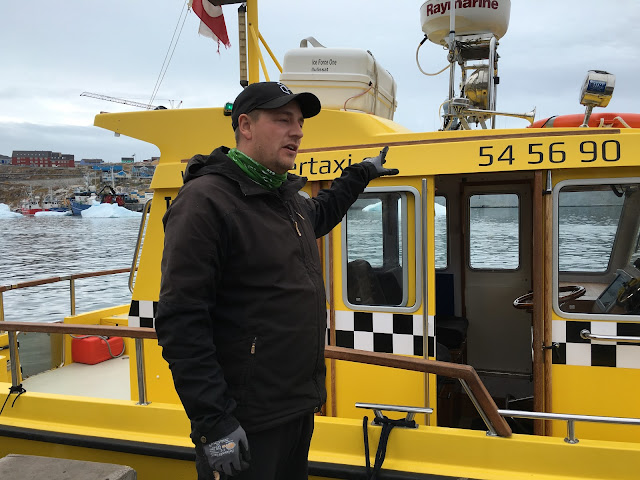 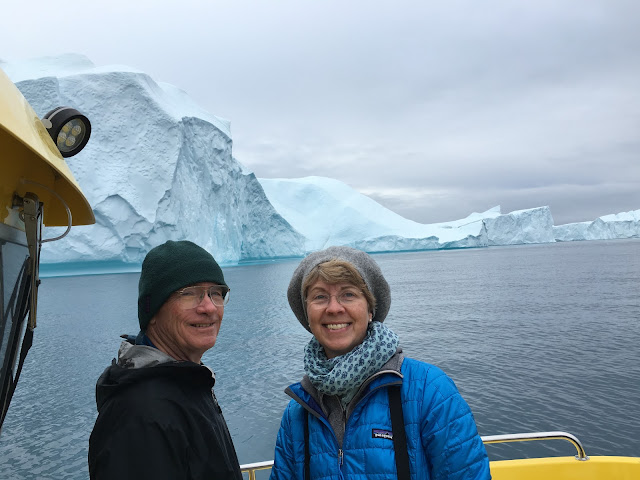 The Kangia glacier is one of the worlds largest and most active and drives the tourism industry which now drives this town. It's a UNESCO World Heritage site with calving speed of 40 meters per 24 hours. We occasionally heard the crashing sound as portions collapsed and 15,000 year old air pockets exploded on impact. A lucky call from another boat sent us off to chase humpbacked whales and we were rewarded with some close encounters of three of these massive creatures. 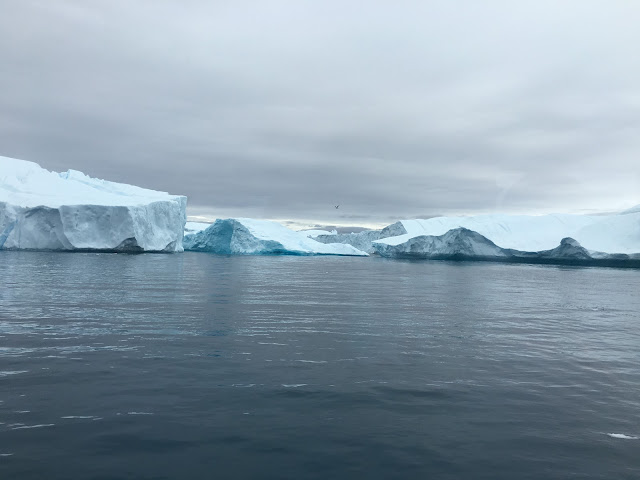 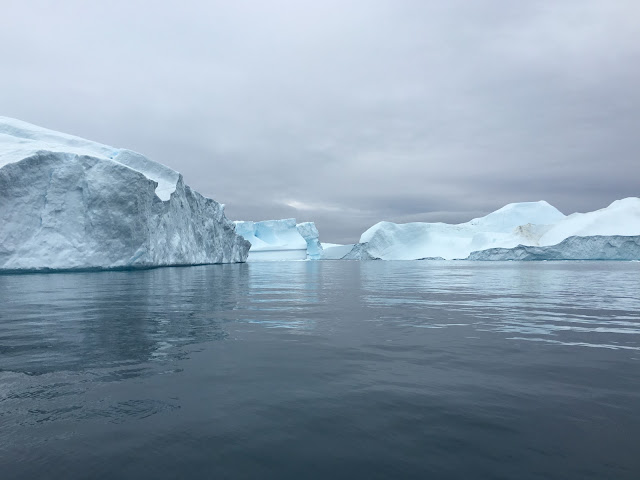 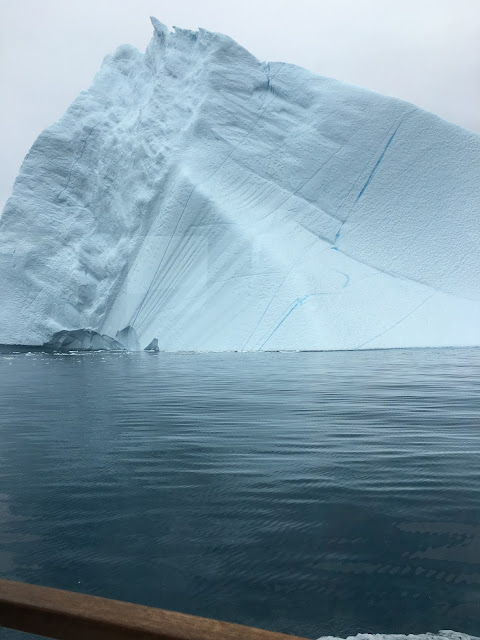 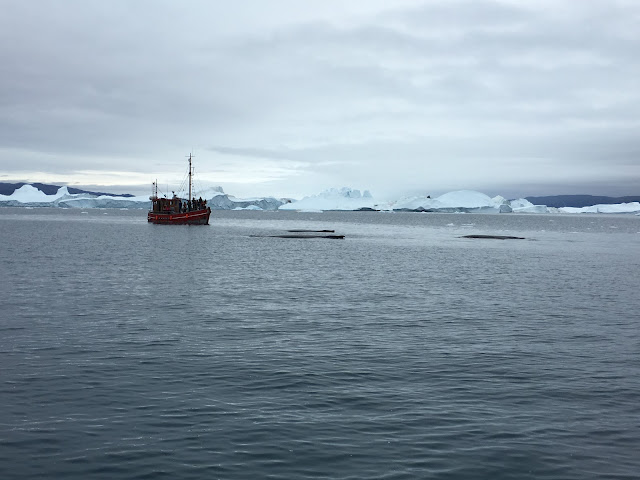 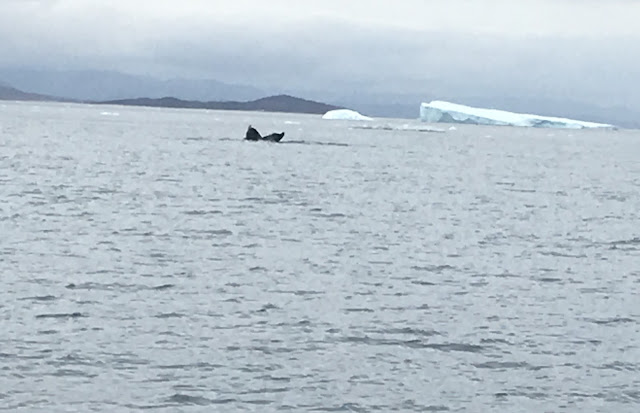 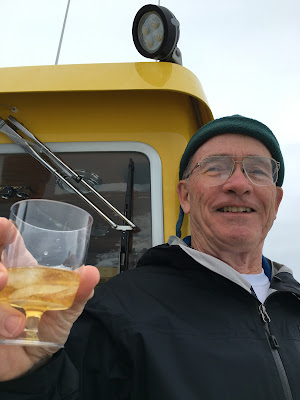 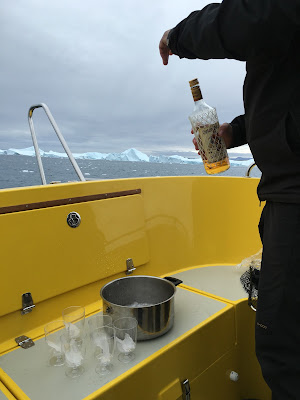 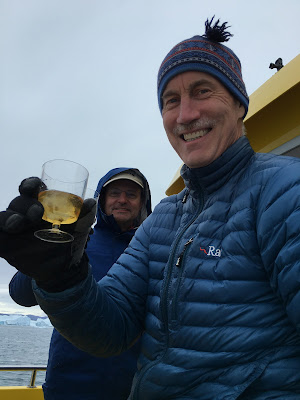 August 27
Into every perfect trip, a little rain must fall. But it gives time to catch up on writing and reading. We did make a mid-day trip to the Art Museum, starring Emanuel A. Petersen, 1894-1948, a Danish painter whose images of Greenland painted in the 1920's are still relevant today. Then onto the Ilulissat Museum with photography and exhibits on the life of Greenland's people since it was inhabited by the paleo-Eskimos who migrated across the Bering Strait, settling in Alaska and Canada before reaching Greenland 4,500 years ago. 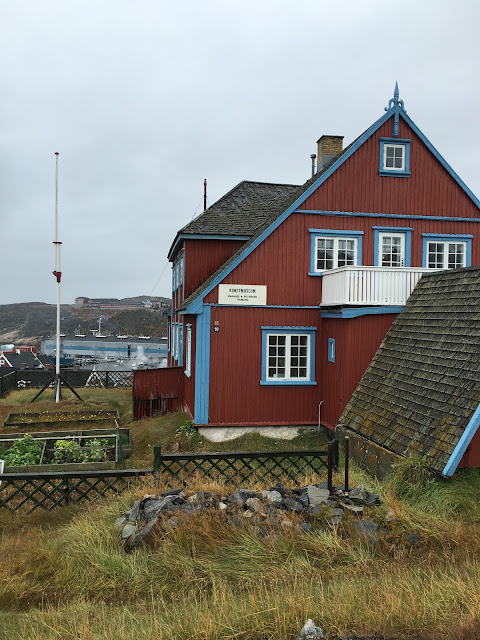 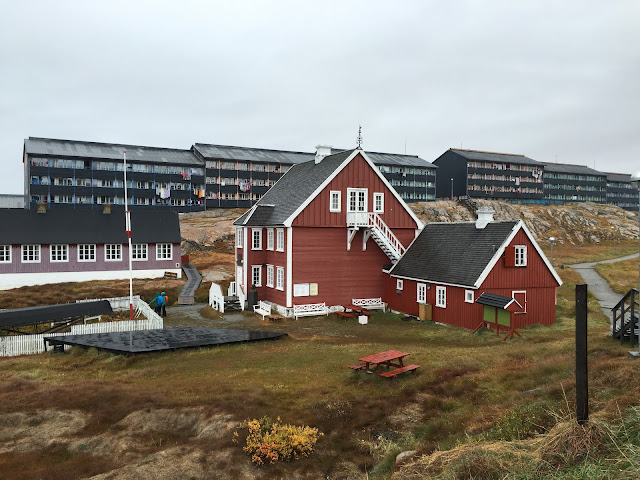 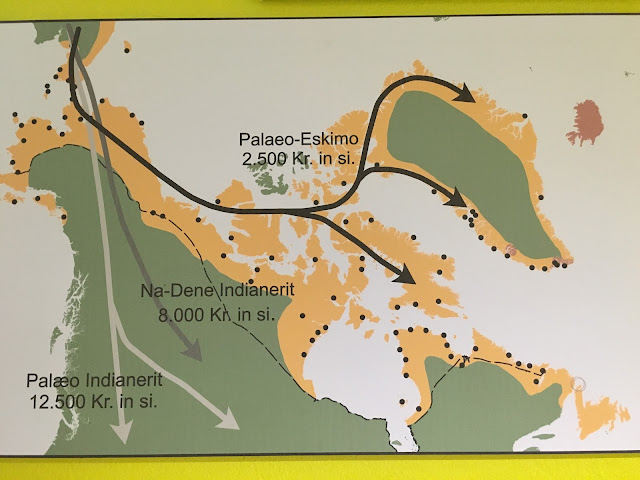 We made a quick run through the local superstore to stock up before tomorrow's flight.