St. John's to the Azores (by Jack)

The second day of this trip was less flying time (one leg of abut 5+30) and somewhat  familiar in that we had flown from St. Johns's (CYYT) to another island in the Azores in 2015.  However, like the prior day, the departure and arrival presented some challenges while the enroute segment was smooth and easy.

We arrived at the St. John's airport a little later (around 0900 LCL) than the original schedule due to the late arrival the prior day.  As expected, the plane had ice adhering to the wing which is a significant hazard and must be removed prior to flight. The good news was it was not snowing at the time of our departure, so we just needed to get de-iced with Type I fluid to remove the ice, but would not need the follow-on application of Type IV anti-ice fluid to prevent further ice contamination.

Our bird was cold, but had stayed in-place overnight despite the howling winds and my bad dreams about it sliding across the icy ramp. 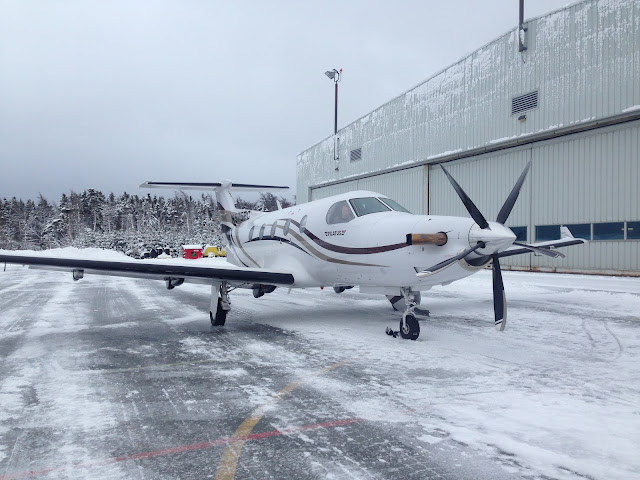 After the pre-flight inspection, getting the clearance, and loading the passengers, we fired-up to taxi to the deice area which is controlled by someone with the radio call-sign ICEMAN.

For anyone that may be thinking of doing this route, St. John's gives you both the non-oceanic and the oceanic clearance from Gander Center which is convenient. In most cases, the local airport will give you a clearance just to their boundary with the agency controlling oceanic airspace where you get a further clearance. We have never had any surprises in this process (e.g., getting an unexpected oceanic routing after being airborne), but it is a different procedure than our typical domestic flying.

Here is ICEMAN about to attack... 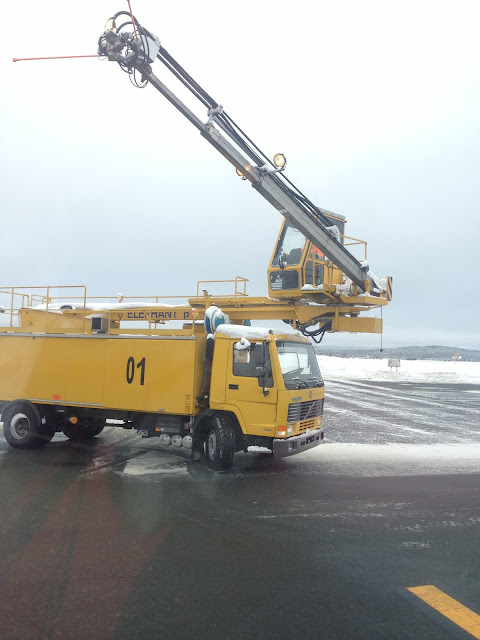 And the attack begins... 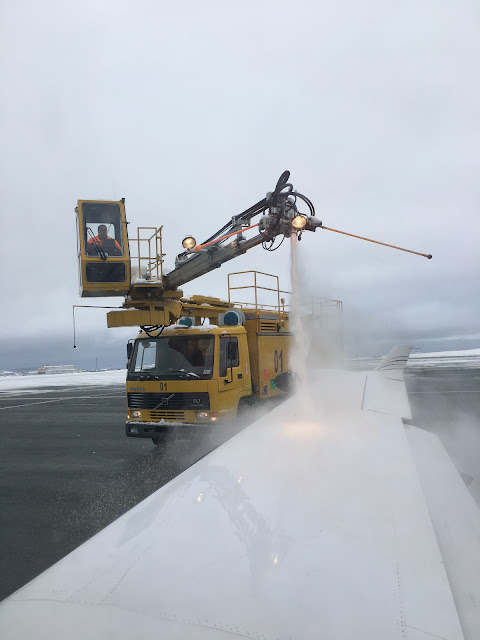 Carolyn got a pretty good video of the process.  You can hear Giuseppe in the background talking on the radio to ICEMAN regarding instructions for what to do and not to do.


After the plane was clear of ice, we back-taxied down runway 34 and departed. The runway in the rear view mirror (this is actually a photo of runway 29)... 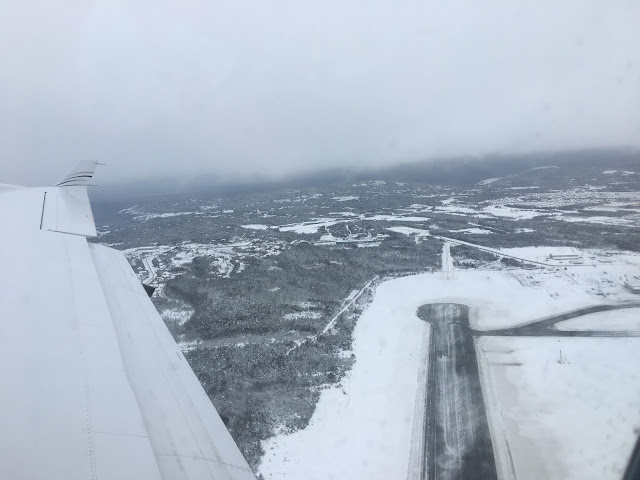 We entered the clouds around 1,000 FT and experienced some bumps until were broke-out into beautiful clear skies at about 5,000 FT. 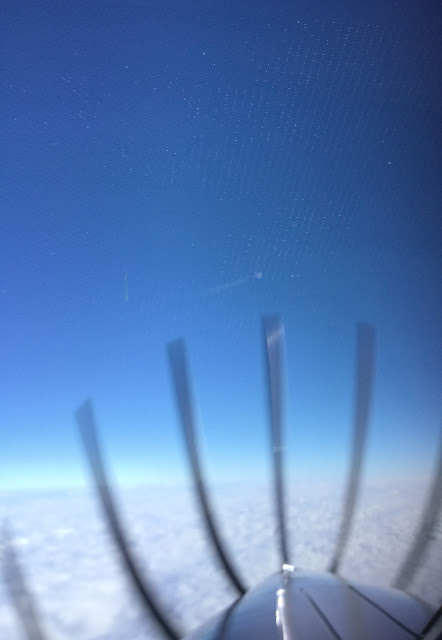 The rest of the flight prior to descending for landing at Santa Maria, Azores (LPAZ) was smooth and in clear skies.  Most of the communication was via long-range HF (high frequency) radio rather than our normal shorter range VHF (very high frequency), but even it was relatively clear and consistent. HF can sometimes be noisy and fade in-and-out as compared to VHF, but it is not limited to line-of-sight range like VHF and thus is used when far from shore or over remote land areas.

We had been checking the weather at LPAZ (Santa Maria) the whole flight using the nifty combo of our inReach Explorer satellite communicator and a service called wxbytxt.com.  With that service, we get global METAR (current airport weather conditions) and TAF (airport specific weather forecasts) anywhere in the world. You just send a short text message requesting weather information on a specific airport to a special phone number wxbytxt uses and then a few minutes later the report is texted back to you all via the inReach device.

All along the enroute portion of the flight the weather at LPAZ had been fine. But, just as we started the descent, we got a report of heavy thunderstorms over the field. That's why you have fuel reserves. However, in this part of the world these storms are often very isolated and move past quickly.  That happened in this case...by the time we were ready to begin our approach the thunderstorm had moved well clear of the island and just some isolated non-convective rain showers remained. 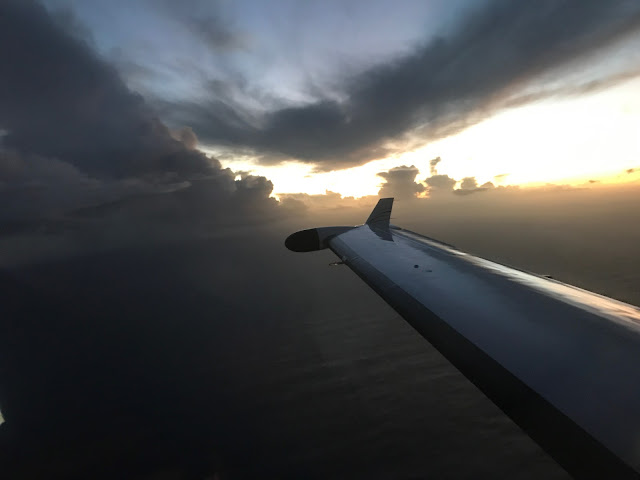 By the time we turned final approach is was just after sunset and by the "crab" angle we had to fly to stay aligned with the runway I suspected we would be challenged with a cross-wind landing. The weather gods did not disappoint as we landed with about a 20 knot crosswind component. To keep the upwind wing down (in order to stop the airplane from drifting sideways across the runway) while still having the longitudinal axis of the plane aligned with the runway (to prevent touching down sideways), I had to step on the left rudder hard. I can always manage a safe crosswind landing, but they are not always elegant and smooth.  In this case I got lucky and the touchdown was smooth and uneventful.

As we taxied into the ramp there were not many planes around. In fact, none.  Our handler greeted us as soon as we shut-down and was very friendly and efficient. The main hazard was walking around on the wet ramp with the howling winds. 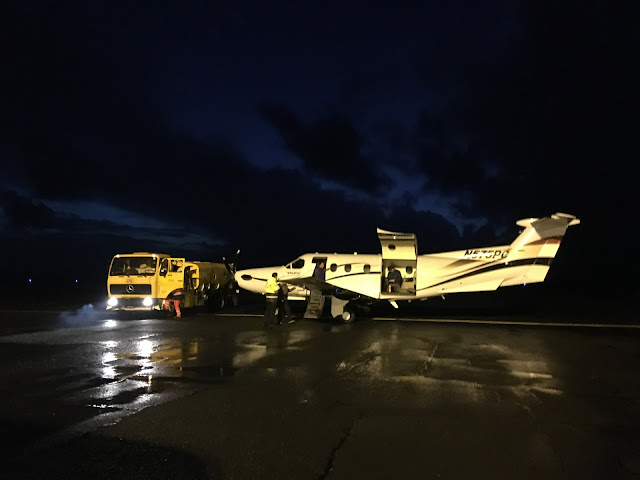 Josh is normally in-charge of fueling and braved the elements to make sure we were properly refueled for the flight the next morning. 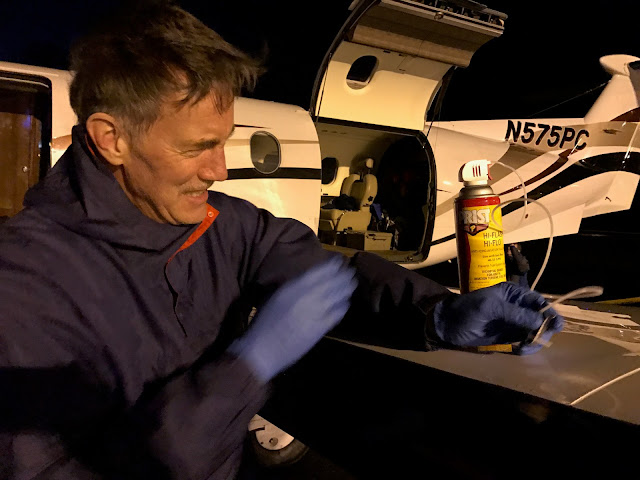 I had embarrassing incident in the airport terminal when I dropped my bag and a bottle of red wine I had stashed in it broke. Ugh.  But, all my travelling companions had their normal great attitude and helped clean-up my mess quickly and we were on our way. We hopped in a van for a short ride to a nice hotel just about one mile from the airport. At the hotel, Carolyn and I emptied my bag and cleaned it plus any contaminated contents.

Tomorrow we begin the final day of our "sprint" (flying consecutive days) with a long non-stop flight from the Azores to Cape Verde off the northwest coast of Africa. This will begin about a week of African flying for the pilots which should be interesting.