After successfully accomplishing the easternmost equatorial crossing yesterday, the pilots blasted-off from Accra, Ghana (DGAA) and headed back to Cape Verde (GVNP) to reunite with the ladies and prepare for crossing the Atlantic to Brazil on the 10th. This 1,550 NM trip had an average headwind component of almost 30 knots at FL300, so it would be a long flight.

Giuseppe made another one of his wonderful educational videos of our taxi-out and departure. Nothing exciting here, but hard core pilots might be interested in the procedures.

The flight was almost a duplicate of our January 6 flight except a bit more of a coastal route. 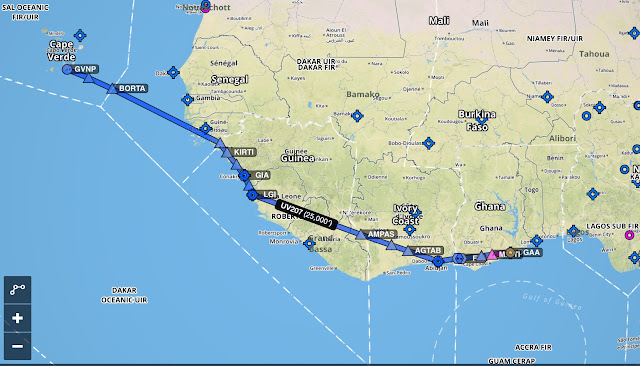 This flight was almost completely routine. About the only remarkable thing to say was it was one of the bumpiest flights we have had in all our RTW flying.  No really bad turbulence, just a lot of light chop for about 25% of the flight.  ATC said they had no ride reports at other altitudes. The only plane we heard say anything was a jet at FL360 reporting moderate turbulence and asking for lower. So, we decided to just stick it out since it was just annoying, but not a safety issue and we did not have any passengers.

The other odd thing about the flight was the fact that there was a lot of haze even a FL300.  There were times we could not tell if we were in a real cloud or the visibility was just low.  From more than five miles above the surface, a thick haze layer of 2-3 miles visibility puts you in a cocoon that might was well be a cloud since you have no visual reference.  Our handler at Accra said the haze was common during this time of the year, but it was not a year-round occurrence.

This is mainly what we saw out the window for the whole flight... 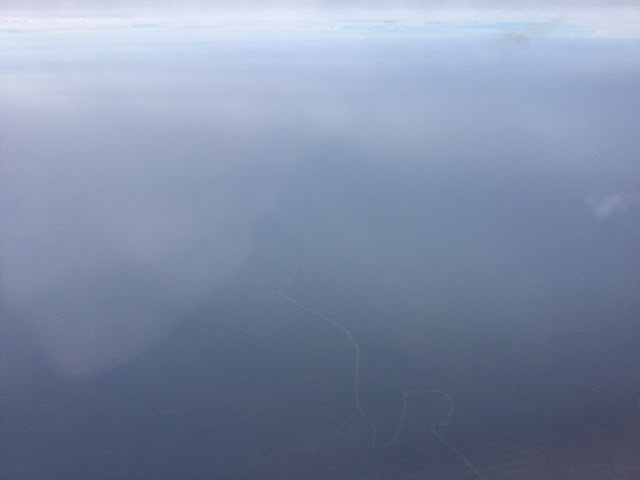 We made a visual approach to runway 03 at GVNP and landed around 1315 local time.  After a delay in getting refueled (the only fuel truck had to service two airliners before getting to us), we were back to the hotel and reunited with Becky and Carolyn around 1530 local time.

Tomorrow we take-off for our fourth Atlantic crossing in the last six months. This time it will be non-stop from Cape Verde (GVNP) to Natal, Brazil (SBSG).
Email ThisBlogThis!Share to TwitterShare to FacebookShare to Pinterest
Newer Posts Older Posts Home
Subscribe to: Posts (Atom)