Today we flew one of the longest routes of the whole trip (except Antarctica)...a 2,303 NM journey from Natal, Brazil (SBSG) to Mar Del Plata, Argentina (SAZM) with a fuel stop in Sao Paulo, Brazil (SBGR).  We decided to cover as much ground as we could over the next two days in order to get to Punta Arenas (our jumping off point for Antarctica) as quickly as possible. We will need to enjoy some more time in Brazil and Argentina on another trip. 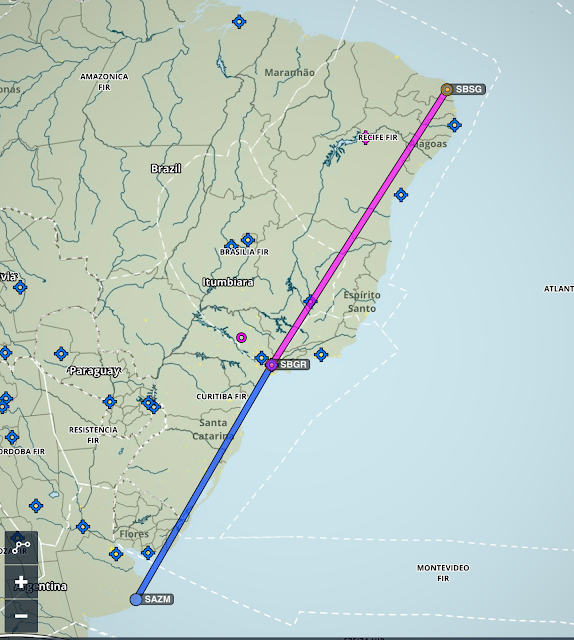 We arrived at the Natal airport around 0630 local and the weather was nice.  The forecast showed good weather for all of the route except the immediate vicinity of  Sao Paulo where rain showers and some thunderstorms were possible. As has been the case for most of our last few flights, we would face a significant headwind component. The total estimated time enroute would be over ten hours. 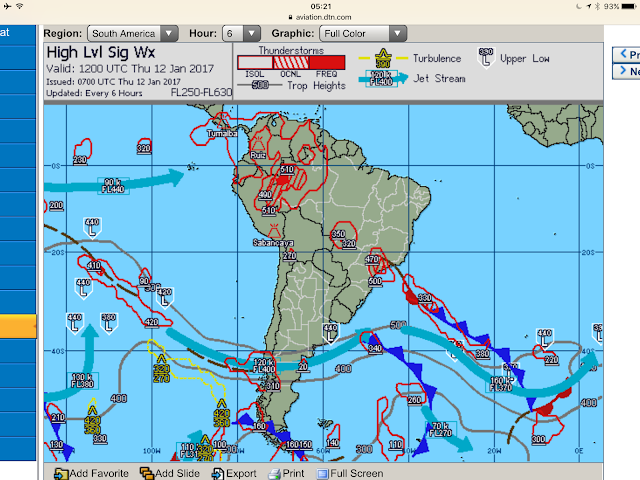 Giuseppe started in the right seat, but was feeling a little under the weather and Josh took over shortly after take-off for the rest of the day. 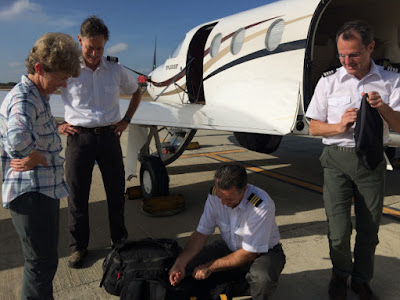 As forecast, the cruise portion of the flight from Natal to Sao Paulo was smooth and clear, but the weather reports at Sao Paulo indicated we would be facing some rain showers on approach and landing there. In any situation such as this one, the challenge is to separate simple rain showers (bumpy, but generally not dangerous) from thunderstorms (potentially very dangerous).

Along the way, we heated our cold soaked lunch sandwiches in the propriety Pilatus oven... 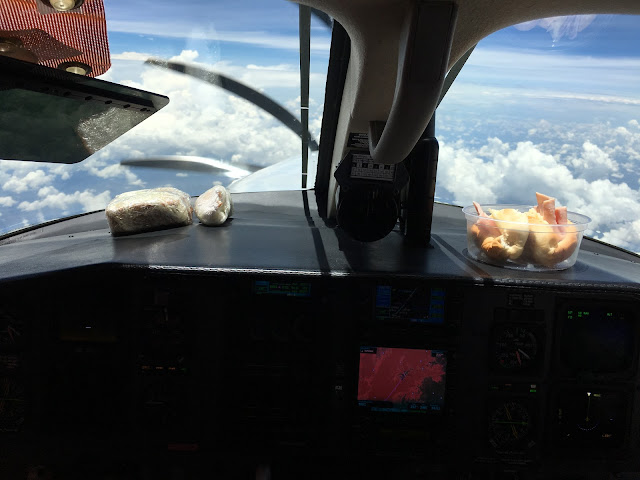 Descending into Sao Paulo the clouds got thicker and darker... 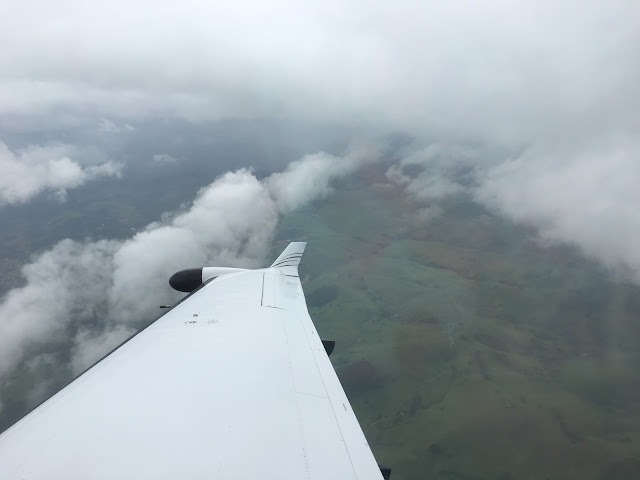 We used all the weather evaluation and avoidance tools at our disposal to include on-board weather radar, on-board lightning detection equipment, and our eyeballs.  The combination of the three indicated to me there was some mix of simple non-convective heavy rain showers and some relatively mild convective showers. We wanted to avoid both, but avoiding anything convective was the main safety issue.

On descent, we flew through a couple of small pockets of heavy rain that resulted in some big bumps, but nothing dangerous. However, when the controller was lining us up for the ILS to runway 25L, we could see a large area of extremely heavy rain on radar that I judged to potentially be convective. Thus, we broke off the approach and had the controller vector us around for about ten minutes to allow the weather to move off the final approach course.  I think this confused the controller as most of the airlines just pushed right through the weather, but I am a cowardly pilot and did not want to risk it. Plus, the passengers had already experienced some big bumps and I wanted to minimize further discomfort for them.

Once the heavy rain cleared the final approach, we got vectored back in the the ILS. However, evidently the controller had not properly judged the spacing between us and the plane on final in front of us and he broke us off from the approach and vectored us around yet again.  This was a very high workload time and I was glad to have a second able pilot in the cockpit. We eventually executed the approach and landed in light rain and about five miles visibility.

Still raining on the ramp, but no thunder... 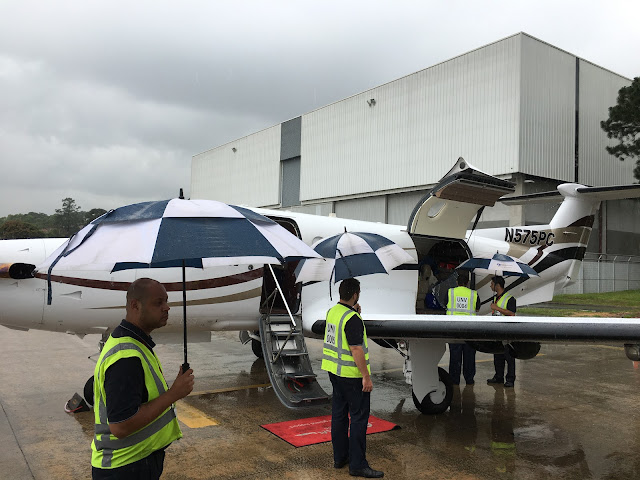 Once on the ground, we started an elaborate paperwork process. First, Argentina and Chile require the cabins of all aircraft entering their countries to be sprayed with special insect disinfectant (aka, bug spray) before entering their country. The handlers at Sao Paulo provided us with two huge cans of supposedly approved disinfectant. Giuseppe (despite not feeling well) volunteered to do the spraying ensuring the main and cargo door were wide open.

We understood that the inspectors in Argentina would demand we present them with an empty can of spray as proof that we had disinfected the cabin. The disinfectant cans were big enough for a large passenger jet, so it might have been the case that some of the disinfectant was sprayed outside the plane. 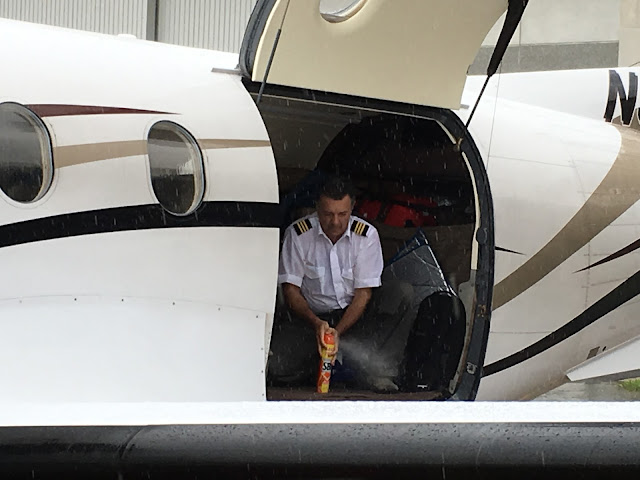 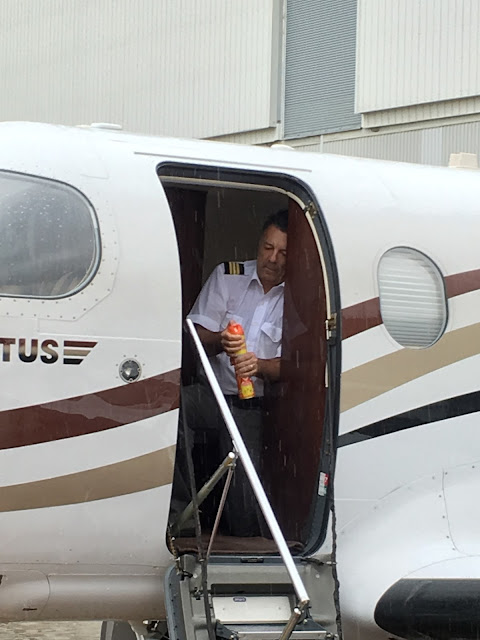 Once the spraying charade was done, we were all hauled over to the main airline terminal where we were first screened as inbound domestic passengers and then as outbound international passengers. There was much paperwork and the whole process took almost an hour putting us well behind schedule.

Once returned to the plane with all our paperwork and bug spray in order, we refueled, got our clearance to Mar Del Plata (SAZM), and started to taxi. SBSG is a major airport in Brazil and very busy with commerical airline flights. We had to wait about 20 minutes for departure putting us further behind schedule.  Finally, we were cleared for take-off and departed into cloudy skies, but most of the rain showers had dissipated and it was a fairly smooth climb-out.

Carolyn made a video of our departure...

Sao Paulo in the rear-view mirror... 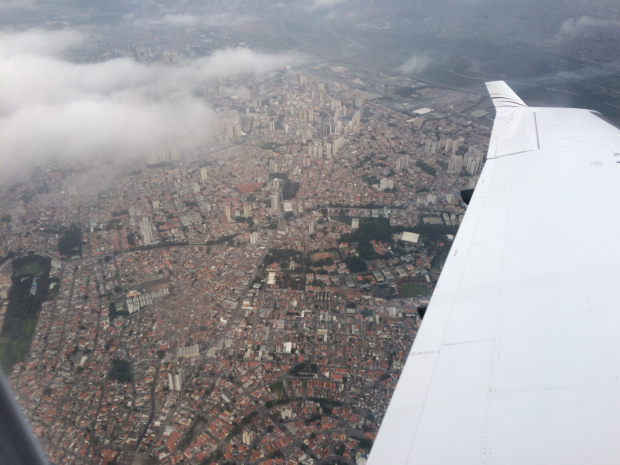 The climb was in-and-out of IMC until about FL250 when we broke into clear skies. We initially climbed to FL300, but the headwinds were stronger than predicted. We decided to descend to FL280 to pick-up some speed and save some time given we were about 1.5 hours behind schedule.

The cruise portion of the flight Sao Paulo to Mar Del Plata, Argentina (SAZM) from was smooth and uneventful although slow as we faced a 30+ knot headwind.

As we began our descent Mar Del Plata the sun was setting and the tower reported a strong crosswind and wind shear on final. Great, another nighttime heavy crosswind landing like the Azores. I did my best with the pilot stuff and we manged to get on the ground safely and smoothly although there some nice bumps on short final. 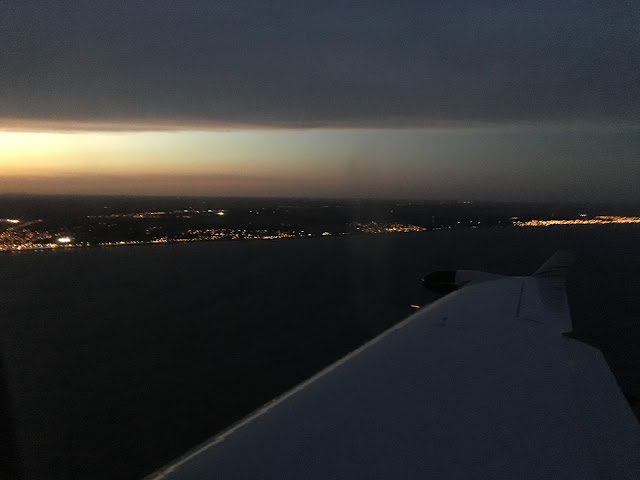 Mar Del Plata is a relatively sleepy airport with just a handful of airline flights daily. Nevertheless, we were greeted by no less than three government officials (including one in a lab coat) and a drug sniffing dog.   In addition, Universal Aviation (our over-arching handling agent) sent the manager from their Buenos Aires office, Chris, to coordinate both our arrival and departure the next morning. Chris spoke prefect English and was excellent in all regards. 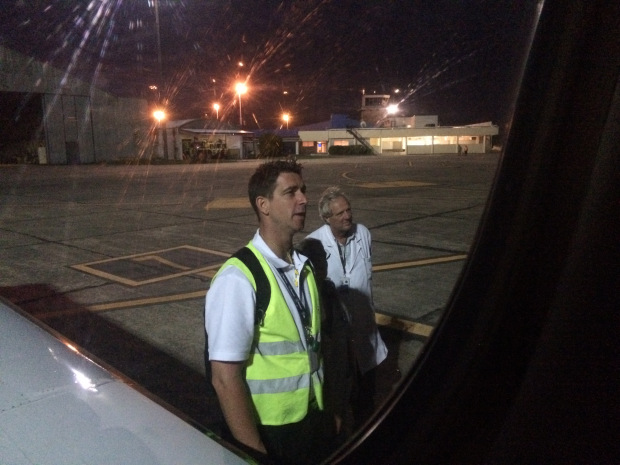 One of the officials that met us demanded to see our empty can of bug spray and immediately said it was not the right type. Ugh. Were we going to be sent back to Brazil based on the wrong formulation of bug spray? Fined many thousands of dollars? All I know is the Universal handling agent, Chris, had a few private words with the official and we were granted forgiveness "just this one time." If any money changed hands, I did not see it.

The gentleman in the lab coat told us we could not remove any trash from the plane (we had two bags full). We also had a potty to dump, but we did not even think about asking to do that.

The drug sniffing dog and his handler were both very nice and, of course, the dog's search of the plane turned-up nothing illegal. 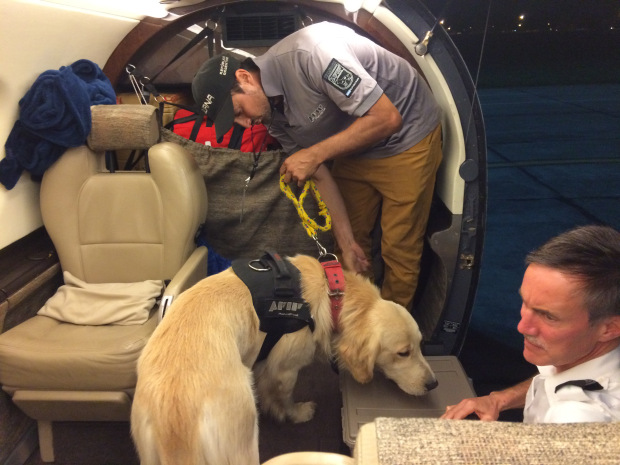 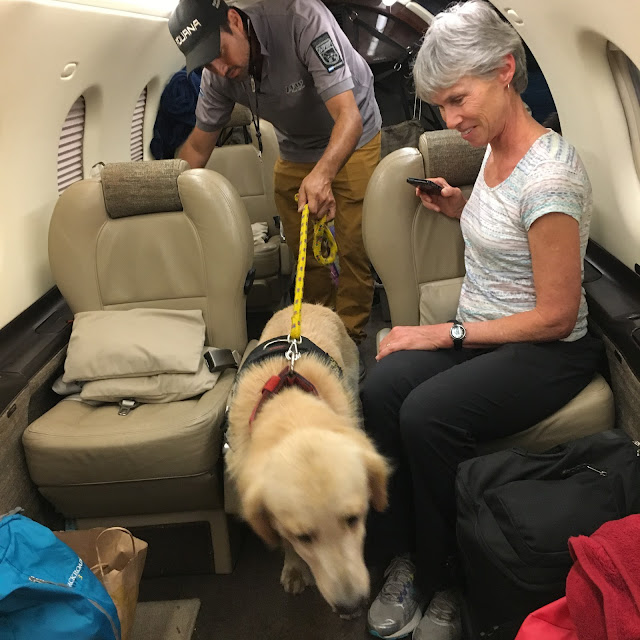 We were finally cleared to leave the plane, refuel, and go into the terminal for further inspection and processing.  N575PC was the only GA plane on the windy ramp as we secured her for the night... 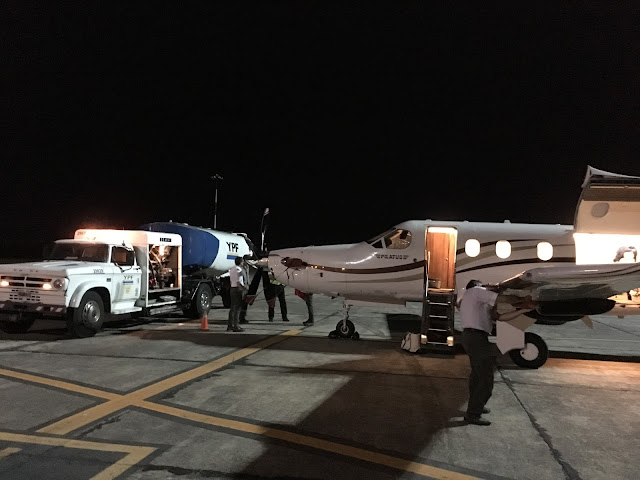 After about an hour of inspections and paperwork (relatively painless thanks to Chris), we were in a van headed to our hotel (a very nice Sheraton). A late evening room service meal and we were finally in bed before midnight.

Given our late arrival, we decided to postpone our departure the next day by about 1.5 hours in order to allow adequate crew rest.

The next day was scheduled as a relatively easy 1,100 NM non-stop flight to Punta Arenas, Chile...the bottom of the world...almost.
Email ThisBlogThis!Share to TwitterShare to FacebookShare to Pinterest

Flying to Natal, Brazil (by Carolyn)

January 12
Jack will fill in the details, but this was a loooonnnggg day of flying. We left the desiccated plains around Natal and flew 6+ hours to São Paulo (refueling stop only), circling that airport for many minutes while waiting for storms to pass the airport. The air was cool and moist, and the vegetation typical of a temperate zone.

We were met by a team of five handlers and had to go with all our luggage (but not the extra gear packed on the plane??) in a van to the commercial terminal. Since our next destination would be Argentina, we needed to officially leave Brazil. Immigration control, passport stamp, baggage x-ray, metal detectors...then back to the van, and back to the plane. The guys refueled while Becky and I looked at a few birds.

Entertainment was provided by Giuseppe who conducted the spraying activities. Apparently, any plane entering Argentina must be doused with some kind of mosquito control spray and your "proof" is the empty can.

Five more hours of flying put us into Mar Del Plata, Argentina, after dark. This island town off the coast of Buenos Aires has a small airport with a vigilant sanitation officer who chewed us out in Spanish for using the wrong kind of bug spray, and she refused to let us throw away any trash or empty the toilet. We almost thought she was going to make us turn around and go back to Brazil. The inspection included a dog who sniffed our plane inside and out, sniffed the luggage, and then sniffed the luggage again after it had been x-rayed.