Polar Round-the-World? What the heck does that mean?

Last summer (2015), we flew our Pilatus PC-12 round-the-world (“RTW”) for the first time in an eastbound direction. Fédération Aéronautique Internationale (“FAI”), the world governing body for air sports, even gave me and my full-trip co-captain, Josh Marvil, a cool certificate they call a Circumnavigator Diploma... 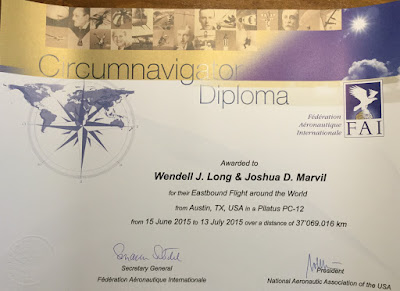 We also were listed in the much less formal (but very cool) earthrounders.org website.

Once we completed this trip in July 2015 (public blog is here), my wife thought “We have crossed that off the bucket list.” For better or worse, that trip went so well and was such a rewarding experience for me, I want to do it again. She is being a good sport about it.

Of course, just repeating the same trip would be sort of boring. We could do a similar trip except westbound, but that also seemed too similar to the Summer 2015 trip. I was looking for a new and bigger challenge. After much thought, we have decided to take-on the challenge of flying a Polar RTW.

What is a Polar RTW? While one could define it a lot of different ways, FAI defines a polar circumnavigation as follows:

- The flight must be completed within 365 days in the same plane.

Note on the FAI website that while many eastbound and westbound circumnavigator diplomas have been issued by FAI, so far, no polar circumnavigator diplomas have been awarded. So, if we get this done, we likely will be the first to do it in accordance with the FAI rules. Sounds like an interesting challenge and I started to work on the planning shortly after returning from the eastbound RTW.

My partners in this effort are three excellent pilots including Josh Marvil who completed the entire Summer 2015 RTW. Good friends and pilots Giuseppe Caltabiano and Jerry Seckler completed significant portions of the 2015 trip and plan to complete all or part of the Polar RTW. All four pilots have more than 100 years of combined flying experience. I absolutely could not do this trip as efficiently or as safely without these excellent aviators. Many thanks to all three of them for being part of the team.

In addition to the flight crew, the spouses of each pilot were also part of the journey and tentatively plan to join us for at least parts of the polar trip.

It should be a grand adventure.
Email ThisBlogThis!Share to TwitterShare to FacebookShare to Pinterest
Newer Posts Home
Subscribe to: Posts (Atom)