Ilulissat, Greenland to Duluth, MN via Iqaluit, Canada (by Jack)

After three great days in Ilulissat, it was time to head home (Austin, TX). The flight time between Ilulissat and Austin was just a bit beyond what my operations manual allows even with three pilots, so we planned to break-up the trip with an overnight in Duluth, MN. Today’s flight would start with a relatively short flight from Ilulissat to Iqaluit, Canada followed by a much longer leg from Iqaluit to Duluth. 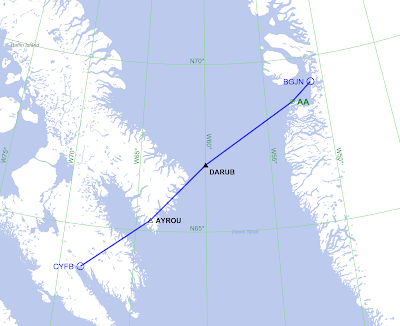 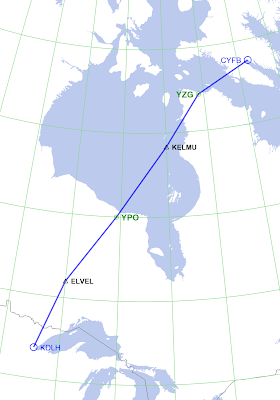 To add to the challenge, when we arrived at the Ilulissat airport on the morning of departure, the visibility was very good, but by the time we had the plane ready to go it had dropped to 300 meters. Some of the local pilots said the wind normally came from the east off the icecap and was very dry, but this morning the wind shifted to the north-northeast which brought in more saturated air from over the ocean. As soon as the wind shifted from the east toward the north, the visibility dropped like a rock.

Technically even 300 meters was within take-off minimums and we had a good take-off alternate (barely) with the Kangerlussuaq Airport (BGSF) just about 30 minutes flying time to the south.

LVP (low visibility procedures) were in effect and all the runway lighting was working, thus the “book” said we only needed 250 meters visibility for take-off. Well, minimums are just that…minimums. After walking out and looking down the runway and knowing it would be a maximum performance short field take-off, I just did not feel comfortable with departing into 300 meter visibility. So, I arbitrarily decided we would not depart without at least 500 meters visibility which would mean our whole take-off roll area would be visible.

Since we had some time to kill waiting for the visibility to improve, Josh asked one to the airport staff to escort him up to the “tower” (actually an AFIS) so we could pay our handling and fuel bill. This was the only stop on the whole trip where the charges could not go directly to Universal Aviation.

While Josh was up in the tower, Giuseppe called for our clearance to Iqaluit. The tower (Josh’s voice) responded promptly saying “Sorry sir, we cannot issue clearances to Italians.” After a bit of back-and-forth, the “real” AFIS person issued our clearance which was basically as filed. But, the visibility was still way less than 500 meters, so we waited. Here are two pictures of me staring out the main door trying the “wish” the fog to rise with co-captain Giuseppe standing-by. 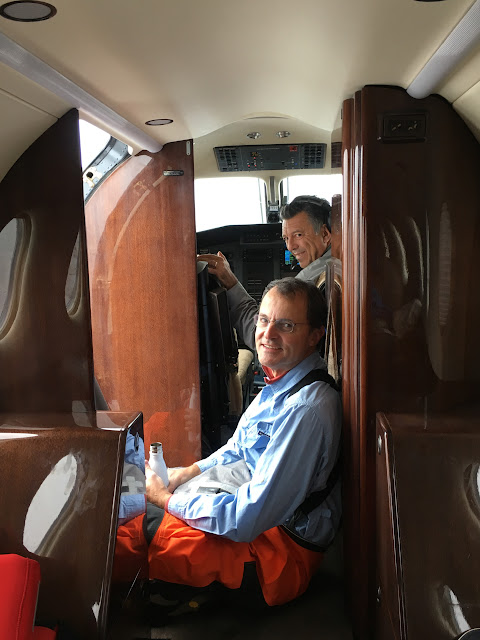 After waiting about 45 minutes, the fog finally started to lift and AFIS reported 900 meters visibility. Finally, we were able to close the door and get started.

In our bird, the POH recommends not departing until the battery is almost fully charged which is defined as the battery accepting 15 amps or less of juice from the generators. Depending on the state of charge before the start and the time required to start (mainly a function of temperature), charging the battery sufficiently takes 7-9 minutes. This usually does not create a delay in my normal flying in that the post start and before takeoff checklists take around three minutes and taxiing usually takes another 4-5 minutes. In this case, we were departing RWY 07 which was about a 20 second taxi from our parking spot. Thus, we had to wait at the end for about four minutes to allow the battery to charge sufficiently.

Once the battery was charged and all the checklists were complete, we lined-up for departure. Since this would be a maximum performance departure, I made a tight turn at the end to ensure we did not waste any pavement and we briefed a full static power run-up before brake release. So, we got turned around at the very end of RWY 07, stepped on the brakes, ran the power up to full (firewalled the power lever) and once the engine was stable at max power, released the brakes and started rolling. For a short field take-off, you start with flaps 30, quickly go to flaps 15 (at about 50 FT), and then raise the gear.

We had briefed take-off abort points, but the plane accelerated as expected. We rotated at about 1,600 FT down the runway and were quickly in the soup. Giuseppe was very helpful calling all the things I needed to do (flaps 15, gear-up, flaps up, through 800 feet, turn left heading 278…). While things had looked icky on the ground, we were in clear skies in about 20 seconds. It was nice to have that departure behind us.

This is my favorite video of the whole trip…departing Ilulissat. Note the flap position 30 initially, quickly raised to flaps 15. 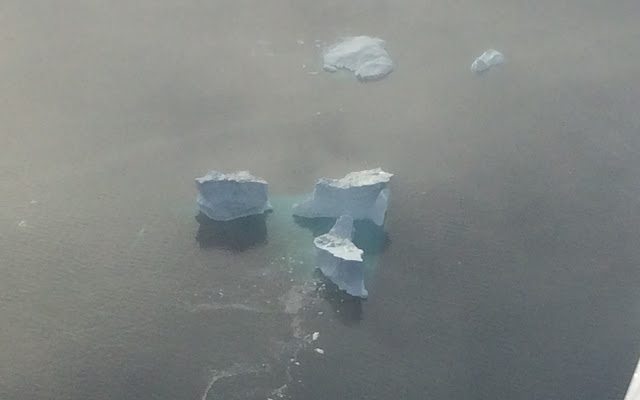 Once above 5000 FT, we bid Ilulissat AFIS good-bye and contacted Reykjavik Control who cleared us to FL280 for the flight planned 2+04 trip to Iqaluit. Above the low fog layer, it was a beautiful day and not much traffic.

The rest of the flight to Iqaluit over the Davis Strait was uneventful. We briefed the ILS approach, but by the time we arrived the weather was good enough for a visual approach. After parking next to a large CAN FORCE C-130, the folks at Frobisher Bay Touchdown Services (same handler/FBO we used on the trip east) gave us a quick turn and we were ready to go in about an hour.

Crossing the coast into Canada...small icebergs compared to where we were in Greenland... 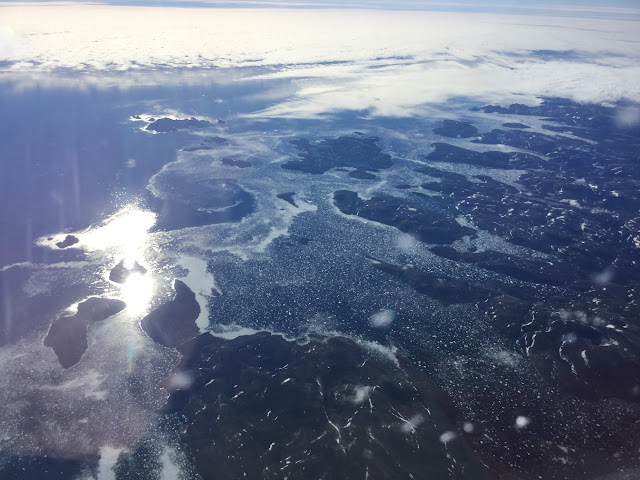 Parked next to the "Big Daddy" CAN FORCE C-130...makes our bird look pretty small.

The weather was essentially clear for our departure from Iqaluit to Duluth. Once again, the ARINC optimization model had suggested a slightly non-direct route in order to take better advantage of the winds resulting in a 4+58 flight at FL280. Weather was forecast to be good at Duluth and we had about 2+30 in reserve fuel (at cruise), so no fuel concerns. 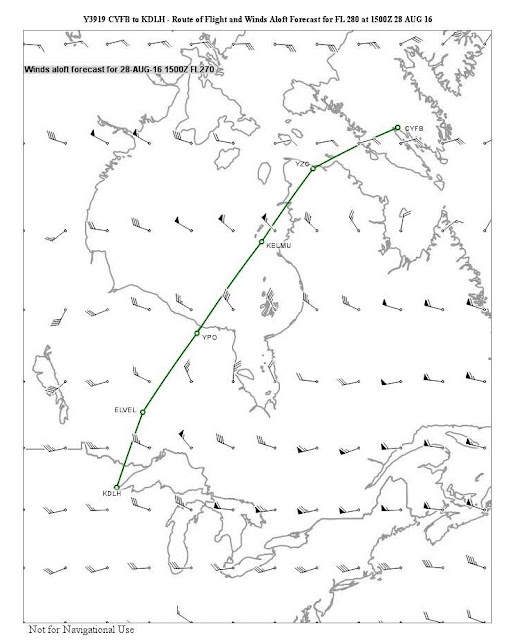 The range of the PC-12 never ceases to amaze me. This is a shot of our engine instrument system panel (EIS) about 45 minutes after departing Iqaluit. Note the 7+19 endurance remaining for a total endurance of more than eight hours, and this was at max cruise power. Pulling back to long range cruise power would likely have extended the endurance to about 10 hours. While one can argue that being in a plane that long is a little confining, from a safety perspective it is nice to have lots of options. Granted, this was partly because it was below ISA temperatures when we fueled and thus we got more fuel mass in the tanks than standard, but it is still nice to not have to worry about fuel. 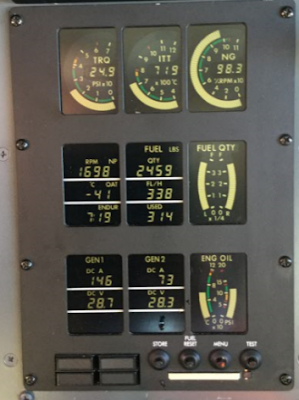 The flight to Duluth was smooth air and VMC the whole way. In fact, while I rarely get bored in a plane, this flight almost fit that bill. Luckily, I had co-captain Giuseppe with me in the cockpit and he always has something interesting to talk about. 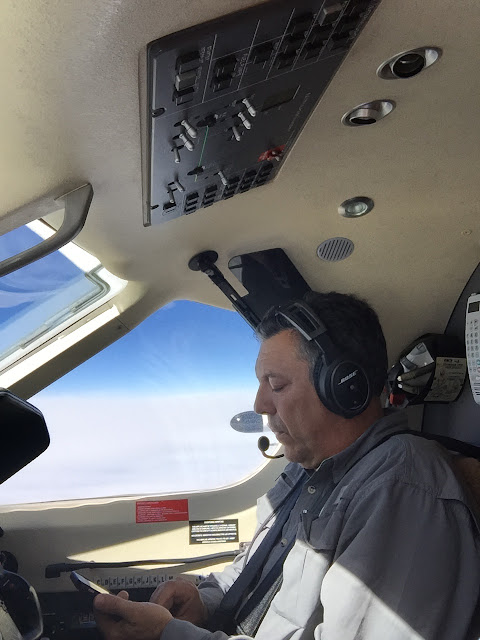 Early in the flight, Montreal had offered us a “short-cut” which we accepted. However, in retrospect, we probably should have declined the offer as the flight ended-up taking about ten minutes longer than the flight plan which is pretty unusual. I am guessing part of the reason for the longer flight time was the “short-cut” which took us off the ARINC wind optimized route. Sometimes flying more miles is actually faster.

Weather in Duluth was good and we made an easy visual approach. The only “hitch” was that US Customs and Border Patrol (CBP) was supposed to meet us at the FBO (Monaco) and clear us into the US there which would have been very convenient. But when I called Monaco on the radio about 30 minutes out, they said CBP needed us to go to the main airline terminal. Duluth tower also made sure we had that instruction and we did as requested (of course).

We shut down near gate 1 at the commercial terminal and several folks from the Monaco FBO and CBP were there to meet us. The CBP folks escorted us into the main terminal and made a vague comment that there was some “equipment” they needed to clear us that was not available at the FBO. My guess is because one of our group is not a US citizen, they needed to take his fingerprints and picture (which they did not do for the US citizens) and they did not have the fingerprints and photo equipment at the FBO. In any event, no big deal. Took about 20 minutes to clear all six of us and then we fired-up the mighty Pilatus again and taxied to Monaco. While the US CBP folks were very professional, I will say re-entering the US was the most difficult customs and immigration process we encountered on this whole trip. It was not terrible, but noticeably different.

The nice folks at Monaco fueled the plane and had a van ready to take us to our hotel. After a nice American style dinner at Texas Roadhouse, I think we all slept well back in the USA.

Here is the whole crew feeling good about being back in the USA... 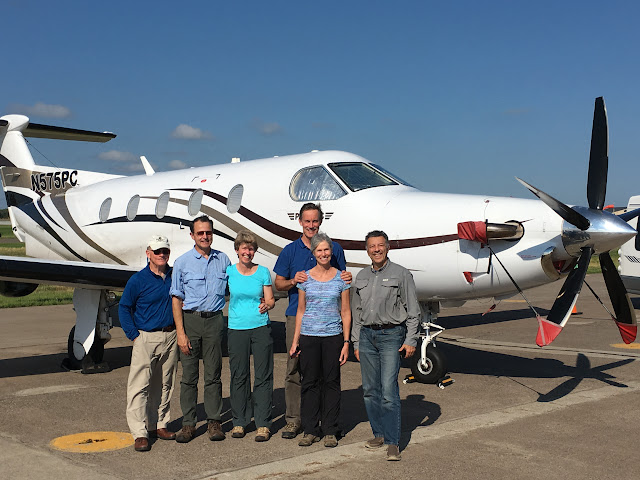 One more flight and this part of the journey is done. I am sure the weather will be perfect now that we are home.
Email ThisBlogThis!Share to TwitterShare to FacebookShare to Pinterest
Newer Post Older Post Home