Today’s flight was a fairly routine domestic flight. Only thing of note is we had probably the worst weather on our departure of the whole trip. A line of thunderstorms had built overnight and were right over the Duluth airport at around 0400 LCL. Fortunately, by the time we were ready to depart around 0900 LCL, the line had moved south of the airport, but still presented a nice barrier to going south.

My habit when faced with weather like this is to file my flight plan for a route that goes well around the bad weather and then ask for short-cuts if weather permits once airborne. Some pilots will do the opposite and file the most direct route and then try to negotiate deviations around the weather with ATC once airborne. I find that approach stressful and a little riskier in that while ATC usually cooperates with pilots asking for weather deviations, sometimes they can’t respond instantly or due to other traffic cannot accommodate your request. That can put a pilot in a tough position. Psychologically, it is easier for me to plan a longer indirect route and then feel like I am “winning” when I get a short-cut. Plus, on a long trip, what looks like a big deviation on the map usually only adds a few minutes to the total trip time.

For today’s flight, the screenshot below shows what the weather looked like when I filed my flight plan. You can see the indirect route to the northwest I requested. That route (if flown exactly) would add about 5% to the total trip time, but kept us well clear of the weather in smooth air and VMC conditions. 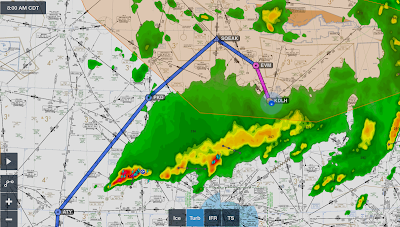 Right before take-off, the weather had dissipated a bit. Rather than try to revise our route prior to departure to cut some corners, we just stuck with the original flight plan and asked for (and received) short cuts in route. The end result was a smooth flight and little stress on the flight crew. 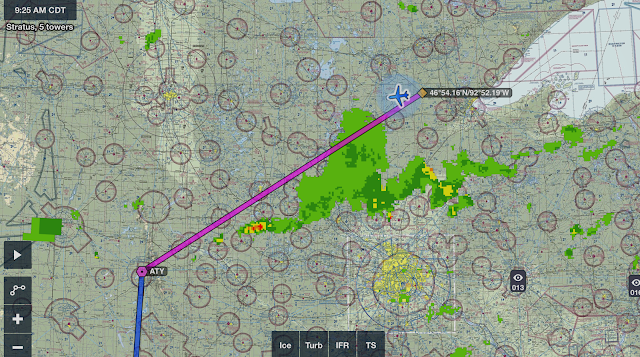 While this seemed like a “normal” flight in that it was all in familiar (to us) US airspace, it was actually one of the longer flights on the trip. The originally filed indirect route flight planned to 5+18 (pretty stiff headwinds), but actual flight time worked out to 5+08 after getting some short cuts around the weather.

Here’s a photo of a happy Jack and Josh enjoying the last leg of this long trip. 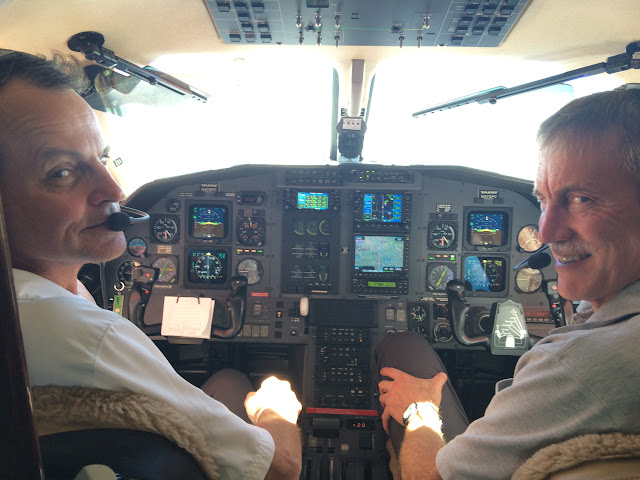 The rest of the flight was uneventful and the weather in Austin was good except for bumpy afternoon cumulus on the descent. These cumulus build-up most every hot summer afternoon in Texas and often are difficult to avoid, so you just have to accept a few minutes of bumps.

Landing in Austin completes the first phase of the polar RTW. If all the permits come through for Antarctica, we plan to blast off on the southern part of the trip on or about January 2, 2017.

The permitting process for landing in Antarctica is quite intensive. We need permits from the following organizations:

We received US State Department approval in July. Josh took the lead on the EPA and NSF applications and they are done and submitted. I am optimistic those permits will be approved as Josh did a great job in creating very detailed documentation of the whole trip with a focus on each entity's particular areas of concern.

Beyond the permits, getting fuel at the airport we intend to use in Antarctica (Teniente R. Marsh Airport, SCRM) is no small task. One of the objectives of this endeavor is to fly the whole trip in a totally "stock" (i.e., unmodified) airplane which means no extra fuel tanks. Given the distance from Punta Arenas to 75S and back (about 2800 NM round-trip), we will need to get fuel along the way. Giuseppe has been working the Chilean side of these issues and has done a great job. In fact, just a few weeks ago he got word that the handler in Chile had arranged to get us fuel (in barrels) at SCRM which is a huge hurdle jumped. The price is astronomical, but at least it is available.

We will pick-up the journey in January as we begin the trip south. Thanks for reading this far!
Email ThisBlogThis!Share to TwitterShare to FacebookShare to Pinterest
Newer Posts Older Posts Home
Subscribe to: Posts (Atom)