Akureyri, Iceland to Ilulissat, Greenland via 75N (by Jack)

[I know this is absurdly long and not many people will want to read the whole thing. I am writing it more for my own benefit and we eventually get these blogs converted into printed books. So, maybe just look at the pictures!]

After two nice days in Akureyri, it was time to blast off on a leg of flight that was one of the main purposes of this whole trip…crossing the northern control point (75N) required for the FAI polar round-the-world diploma. We intended to do this via a flight from Akureyri, Iceland to Ilulissat, Greenland with a big arc north of the direct route. 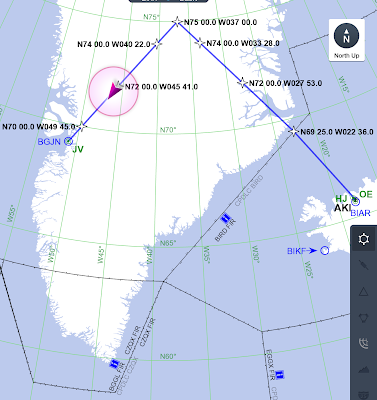 The flight plan time was 4+55 at max cruise power and FL280. Kangerlussuaq (BGSF, better known as Sondrestrom to many Americans due to the US air base of that name there) was our alternate. If we had to divert to Kangerlussuaq (134 NM from Ilulissat), the flight plan indicated we would arrive with almost two hours (at cruise altitude) fuel in reserve. So, fuel was not a big worry and we always had the option of pulling back to long range cruise power if needed.

We were somewhat concerned about Reykjavik Control (which is in charge of all the higher altitude airspace over Greenland) approving such an unusual route. So, when we arrived in Akureyri we visited the control tower and the controller there provided us the direct phone number to the Reykjavik Control flight planning desk…the actual human beings that review, approve, and issue clearances. Giuseppe called them up and explained what we wanted to do and after being transferred to a supervisor had it all worked out. In fact, they became pretty excited about the trip and were eager to help. Their main concern was that we had a working HF radio since a large portion of this route would be way outside VHF communications range.

With the time zones changes, there was no need for us to depart super early, so we filed for a 0830L departure. Anyone interested in the flight planning “package” for the trip can view it here.

We got to the Akureyri airport, did the pre-flight inspection, and were ready to go shortly after 0800L. The weather for the departure was good visibility with a ceiling of about 700 FT overcast. That was well above landing minimums plus there were several take-off alternates within 30 minutes flying time, so we were good to go.

After waiting a few minutes for a landing Air Iceland DHC8, We blasted off down RWY 01 and popped out of the clouds to perfect clear skies above around 1500 FT AGL. It was a glorious morning and the scenery was beautiful…the low clouds filled the valleys, but the surrounding mountains were bathed it beautiful morning sunlight. 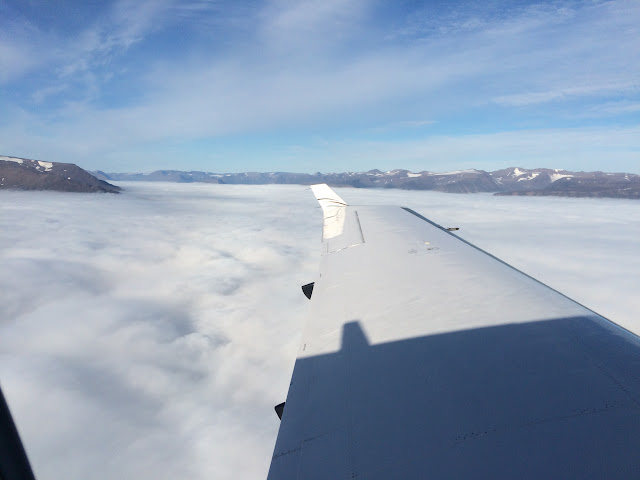 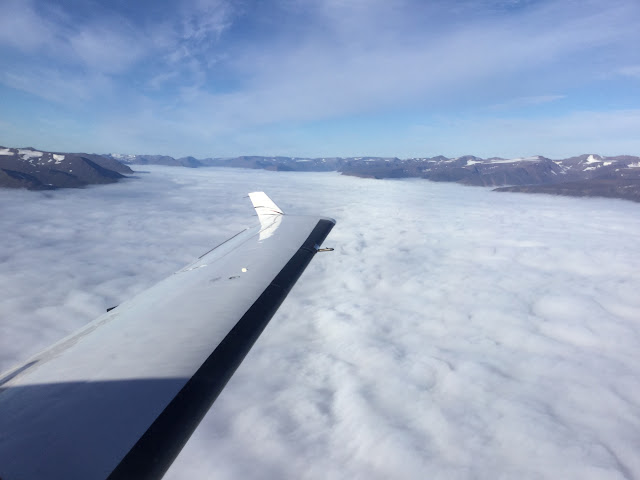 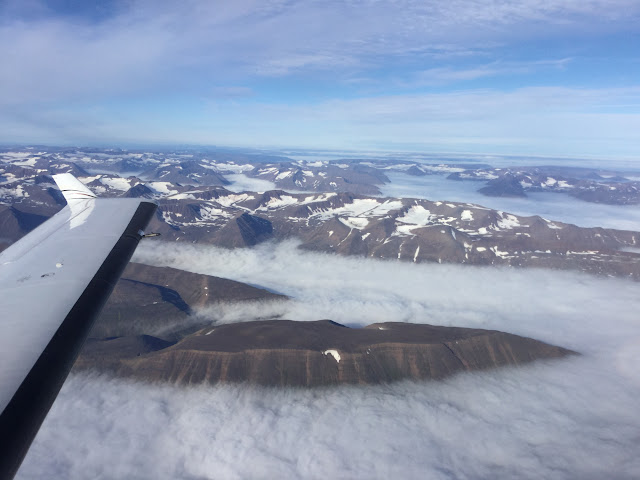 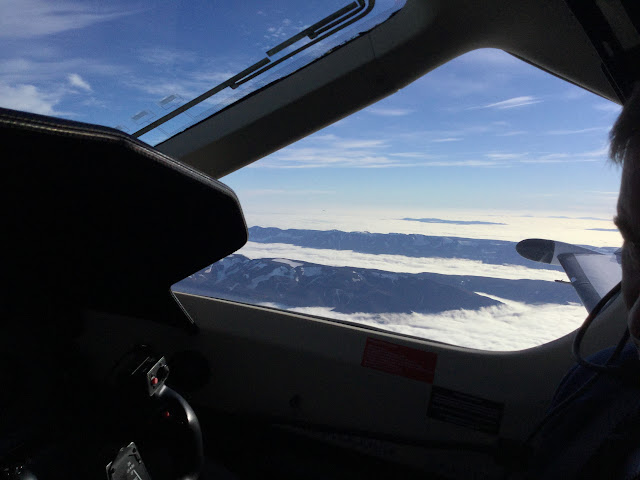 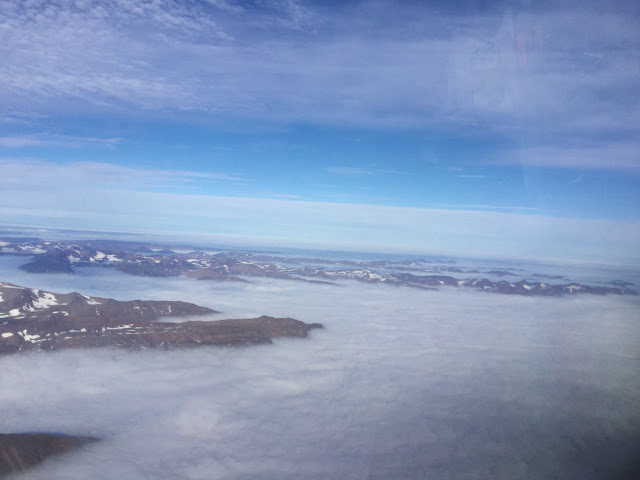 Once established in cruise at FL280, we briefed some of our emergency plans should something go wrong. We have a lot of fancy tech in the plane that will show us all the airports in the vicinity and their bearing and distance, but it helps me to write stuff down. Somehow things I write with my own hand stick with me better than reading displays. So, the prior day I had sketched out our route and all the airports along the route with their distance from each waypoint. 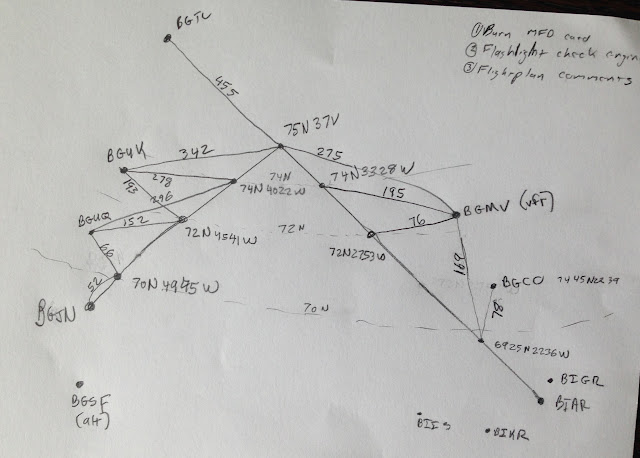 This sketch shows that there would be times we would be as much as 1+10 flying time from a diversion airport. Needless to say, we gave the airplane a very thorough pre-flight inspection. While a landing on the icecap should be high survivable given the equipment we had on-board, we did not want to test that theory.


As we crossed the Greenland Sea toward the east coast of Greenland, it was mainly cloudy below. But, luckily, as we approached the coast of Greenland near Ittoqqortoormiit, the clouds cleared. I know it gets tiresome hearing me say it, but the photos below pale by comparison to the actual view out the window. The scale of the glaciers and icebergs is difficult to comprehend in photos, but here are some anyway. 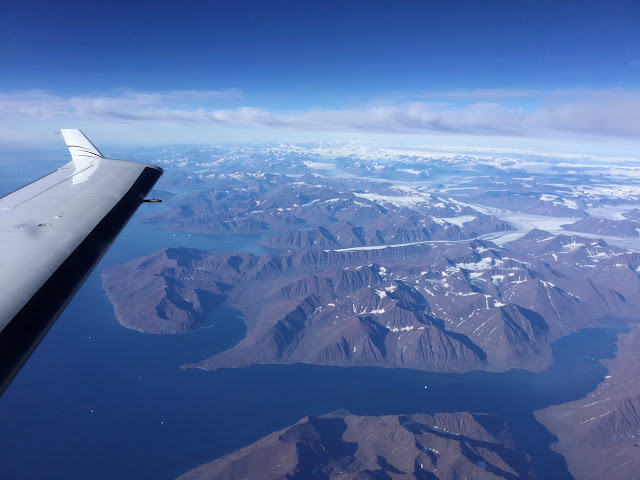 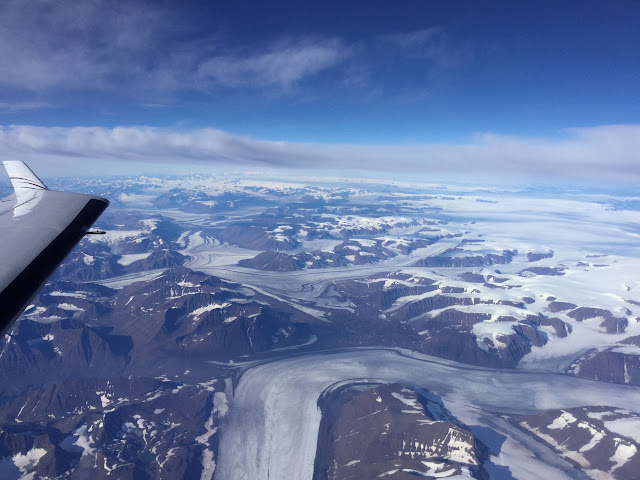 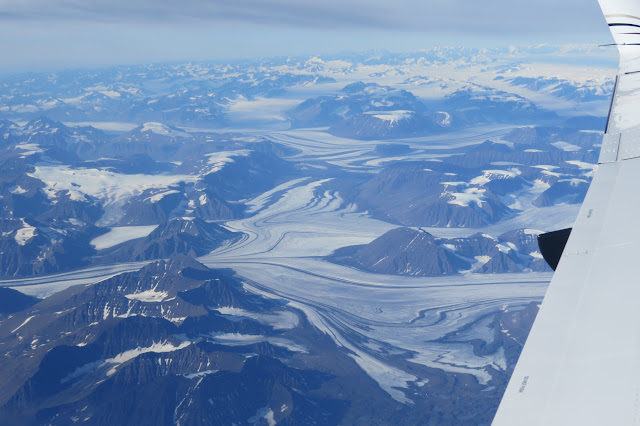 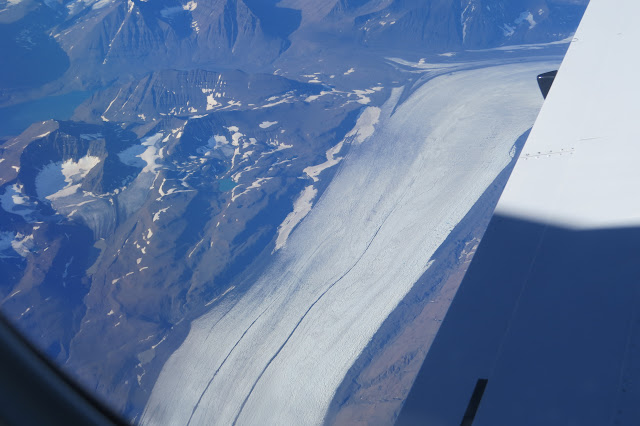 Anyway, we did the HF radio test which worked reasonably well and switched the VHF radios to 123.45 (“five fingers”…for air-to-air communication) and 121.5 (the international emergency frequency). We heard lots of airliners overhead on HF and I am sure if we had had a communications problem one of them could have relayed for us via 123.45.

As we crossed the coast of Greenland the clouds got higher (as the pre-flight sat photo had indicated) and we were “in the soup” for about 10 minutes. But the clouds quickly lowered and although we could not see much of the ice cap, we were in the clear at FL280 for the rest of the flight.

Somewhere after crossing the east coast of Greenland the senior captain took a break from cockpit duties to fraternize with the adoring female passengers. 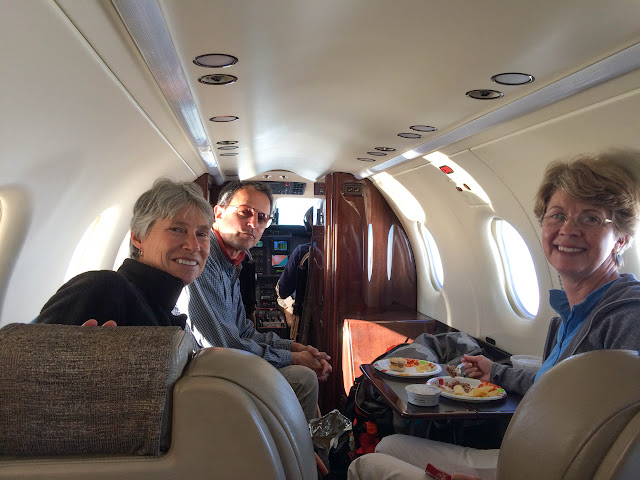 OK, maybe they were not exactly adoring, but they did have food! After being feed, I did my very rigorous exercise routine…


This was sort of a joke, but on a long flight with more than one pilot I do tend to spend a few minutes stretching and then maybe take a “power nap” either on one of the seats (they recline 45 degrees) or just flat on the floor if the air is smooth.

The main entertainment for this segment of the trip was making position reports. Since we were long out of radar contact, the only way ATC could track us is by us providing reports on our past and expected future positions. We used the pre-flight navlog to compute our time estimates for future fixes as reading the estimate directly off the navigation computers is often inaccurate as the computers do not take into account forecast changes in the wind, aircraft weight, and outside air temperature (weight and temperature both impact cruise speed).

As we motored further north, as expected, the headwinds increased to a max component of about minus 52 KTS before making the turn at 75N. We made the turn at 75N a little wide in order to ensure our three onboard flight recorders solidly captured us above 75N. Here is an image of one of the recorders… 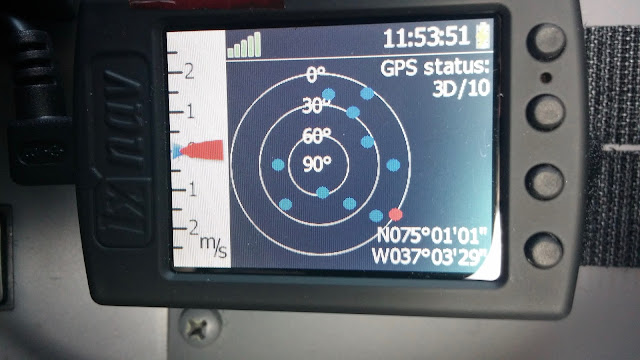 After crossing 75N and letting out a little cheer, we were glad to turn southwest toward Ilulissat and out of the face of the headwind.

While motoring along toward Ilulissat and fairly bored, we hear an interesting call on the HF. I don’t remember the callsign, but let’s call it Aspen. The call (in a very raspy and somewhat distorted voice) was something like “Iceland Radio, Aspen 123, flight level six-zero-zero, position juliet-victor at 1153, estimating golf-november at 1215, gimbi next.” Well, that got our attention. Iceland Radio dutifully read back the position report. A few seconds later a Delta pilot comes on and says, “Iceland Radio, can you tell us the aircraft type that made that last position report?” I suspect he knew, but why not ask. Iceland Radio says “standby.” After a couple of minutes, Iceland Radio comes back and tells the Delta “That was a U2 type surveillance aircraft.” Very cool...almost six miles above us.

As we approached Ilulissat we were still at FL280 and on an HF frequency and needed a descent. Relaying our descent request via Iceland Radio was not very smooth. Finally, Iceland Radio told us to contact Sondrestrom Control (on VHF) which we did and got a descent to FL195 which is the floor of controlled airspace. We needed a 3,000 FPM descent rate per the VNAV, so we got to FL195 pretty quickly and called Sondrestrom again and got further clearance to descend into uncontrolled airspace and were advised to call the Ilulissat AFIS ("Ilulissat Information"). We are on our own again in uncontrolled airspace, but fortunately it was clear air below FL195.

We continue the 3,000 FPM descent toward Ilulissat and contacted Ilulissat Information. They advise us of traffic (an Air Greenland DHC8 going to Sondrestrom and a tourist flight) and that winds favor RWY 25 which is almost straight-in for us.

Ilulissat is a very interesting airport. The runway is fairly short at 2,772 FT and the visual glide slope indicators (VGSI...PAPIs in this case) are set to a very steep 5.6 degrees for RWY 25 (5.1 degrees for RWY 07). As far as I can remember, that is the steepest VGSI I have ever flown. 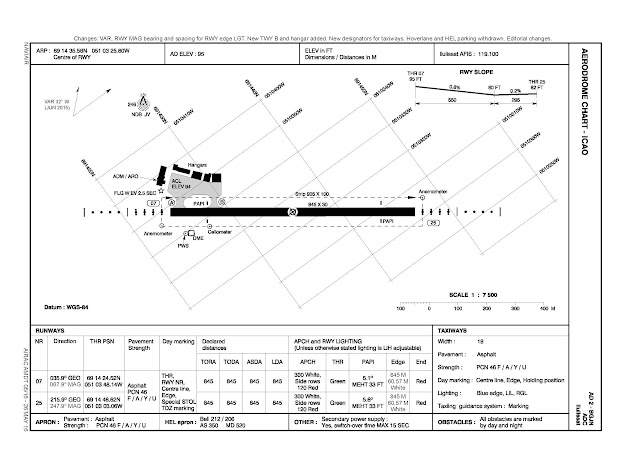 While am not sure, my guess is he very steep approach angle is more for landing distance reasons than terrain. Here is the terrain approach profile to RWY 25 from the AIP… 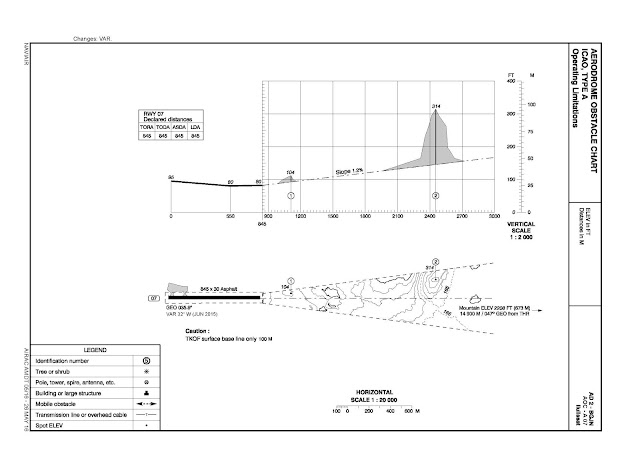 So there is a hill about 232 FT above and 1.32 NM from the touchdown zone, but it does not seem a 5.6 degree approach path is needed to clear that safely (puts you more than 500 FT above that hill). More likely, the steep approach path is there to allow the touchdown zone to be much closer to the end of the runway than the standard 1,000 FT. Landing 1,000 FT down a 2,772 FT runway is not the best idea. In fact, using some Google Earth measurements, it appears to touchdown zone (the large white stripes) is about 450 FT from the threshold. 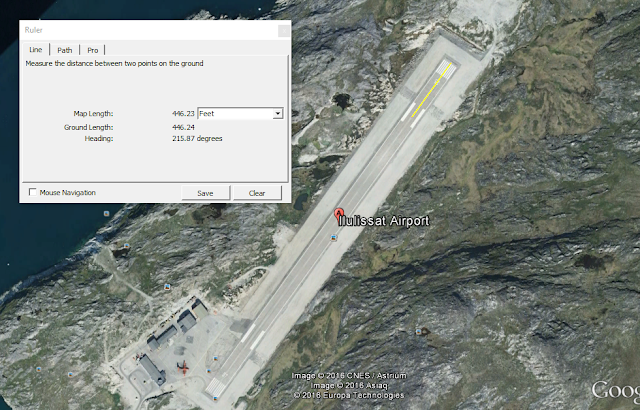 In any event, we briefed the steep approach and I did my best to stay on it once I could see the PAPIs, but it was hard to not feel “we are way too high.” The POH had a supplement on steep approach procedures which basically says to have the gear down and full flaps (40 degrees) set prior to beginning the approach which we did.

The scenery on the approach to Ilulissat was quite unusual…stark but with the addition of large icebergs. 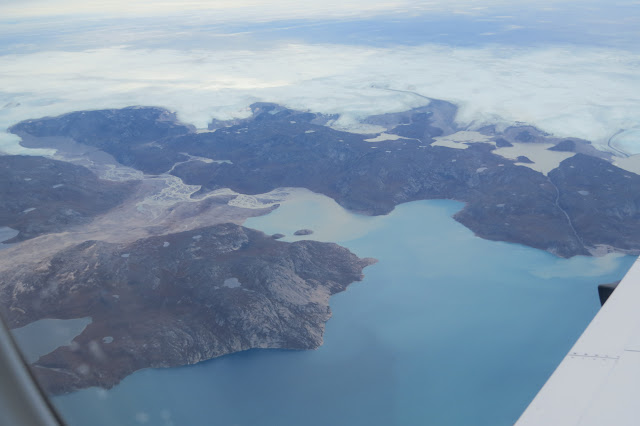 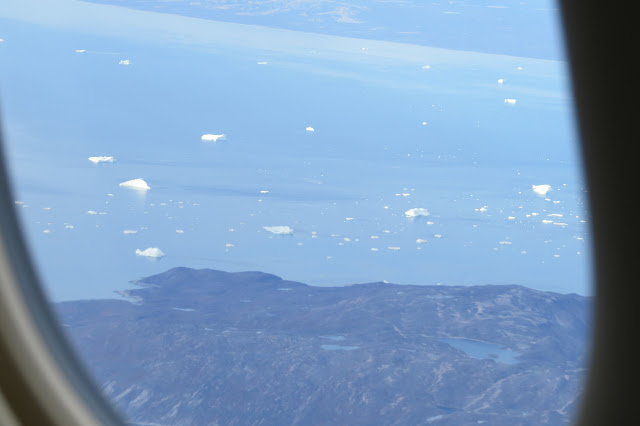 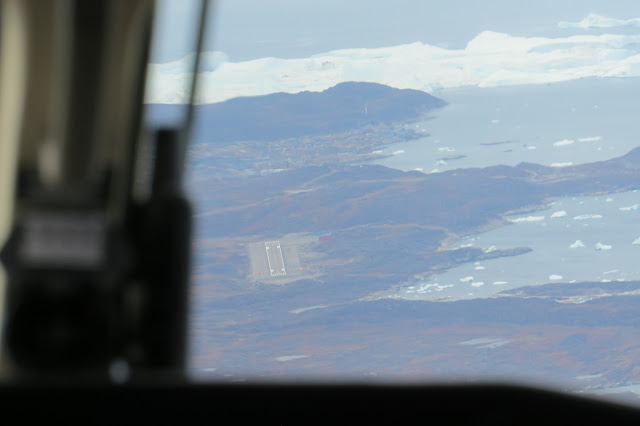 The landing worked out pretty well, we touched down (firmly, as desired) pretty close to the touchdown markers and were down to taxi speed about halfway down the runway.

There is no third party handler at Ilulissat, so the airport personnel serve that purpose. They greeted us and were very nice, but did not speak much English. 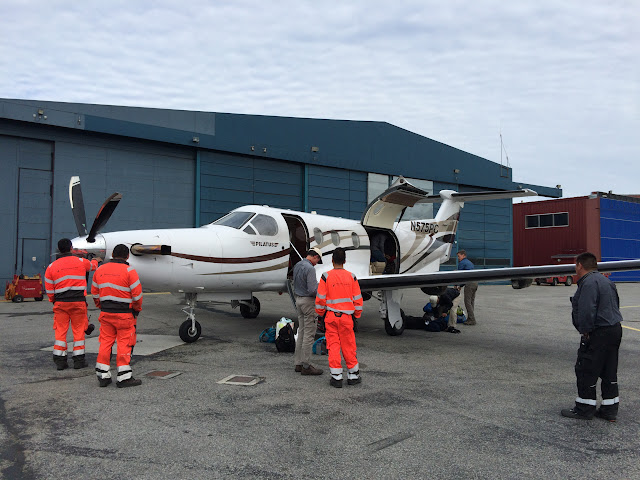 Once again, clearing customs and immigration was a non-event. The flight crew was not checked at all and if the passengers were checked, it was pretty cursory. 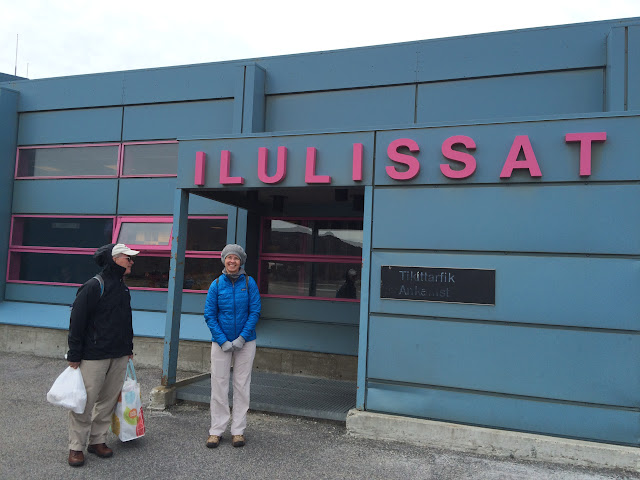 In an incredible coincidence, an Air Iceland DHC8 that landed in Akureyri while we were waiting to depart, landed about five minutes after us in Ilulissat! I would not call Akureyri-Ilulissat exactly a prime airline route. Evidently this was a charter full of Chinese tourists that just happened to be on a similar schedule to us. 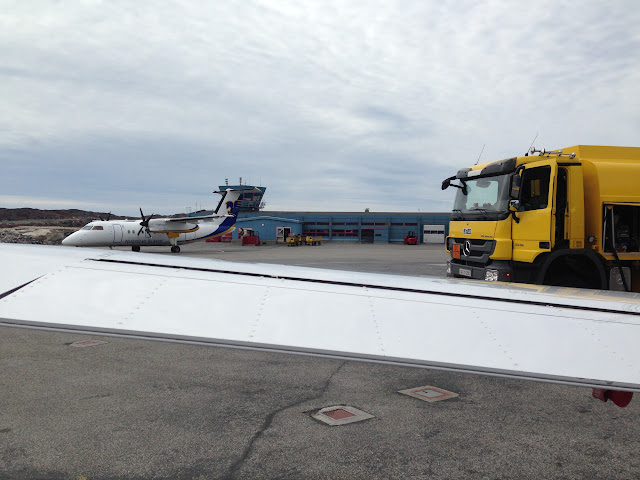 Once we got the plane fueled and secured, we were quickly on our way to our hotel which was just a few miles for the airport.

I know this is supposed to be a nerdy flying journal and not the tourist angle, but I just have to share two photos of the main attraction at Ilulissat...the Ilulissat Icefjord which is a UNECO World Heritage site. The icebergs exiting this fjord are some of the largest in the world and the iceberg that sank the Titanic is thought to have originated here. It is difficult to scale in the photos below, but note the rather large fishing trawler in the second photo for a sense of the size of these floating mountains of ice. 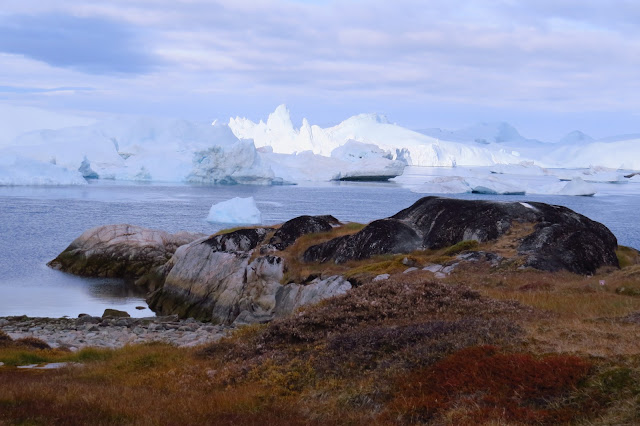 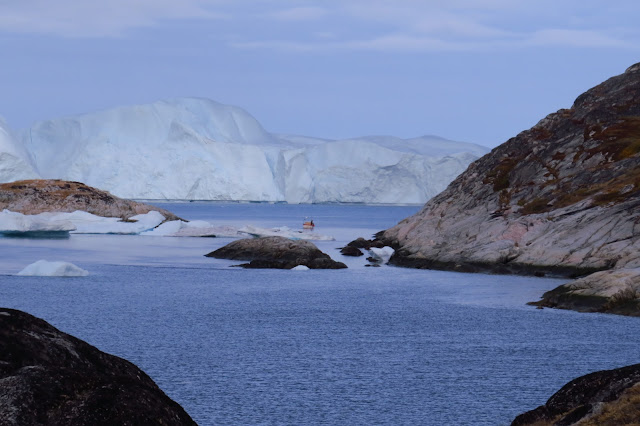