Jan 16
We woke to a brilliantly sunny sky and stiff cold breeze...a good day for car birding. We car bird not because we are lazy, but because when the wind is blowing that hard, you can't hold the binocs still enough to see anything. Today the plan is to drive south toward the tip toes of the Andes mountains and the town of Ushuaia. 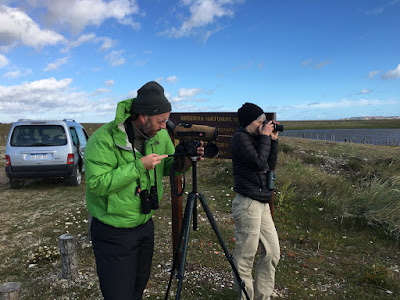 The grasslands around Rio Grande were thin and dry, but as we rolled along they became ever richer and more glorious - imagine a sea of waving seed heads in pink or gold, magenta and even black. We climbed steadily through the forest (all one deciduous beech species), with many dead snags draped with lichens that blow horizontal in the breeze. Ghost trees. This place would make a cool movie location, I thought. 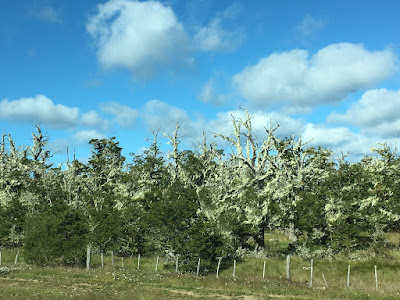 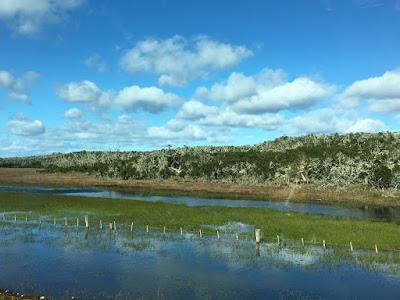 Sure enough, it was used in a movie! When Leonardo DiCaprio needed some additional snowy landscape footage for Revenant, it was summer in the Rockies mountains. So, they loaded up crew and cameras and pine trees, flew here, planted the pines (temporarily) and shot the scene. 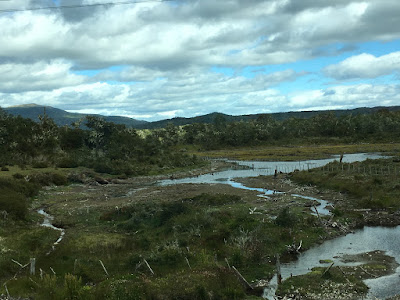 Down, down, down, into the town of Ushuaia in time for lunch and a drizzly rain. 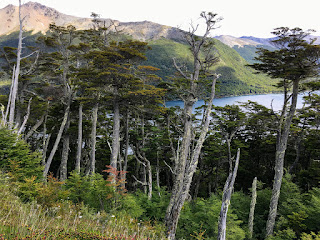 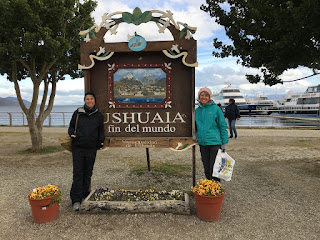 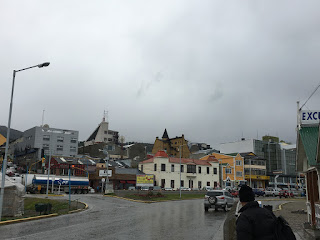 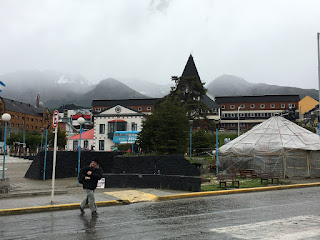 Our plan for the afternoon is a pelagic tour - that's when you take a boat ride into the ocean to look for birds. Birds to the right of the boat are Chilean, and birds on the left are Argentinian, two countries with some healthy competition. This little slip of water is also where the Pacific and Atlantic oceans come together. And, today, that seemed to be very competitive, too. Our ride out to the penguin colony was a brisk, but we had a strong tail wind. 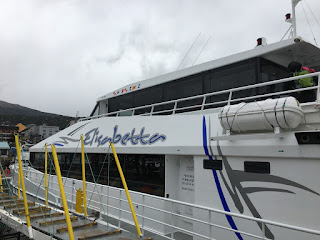 We passed roosting colonies of imperial cormorants that reeked of dead fish, before making it to the penguin colony. There were ten thousand Magellanic penguins which somehow manage to climb up a 150 foot steep hillside to make their burrows for nesting. There were 70 or so gentoo penguins, and two (lost) king penguins. The sun was out, the water was calm, the breeze was frigid, but it was pretty awesome. 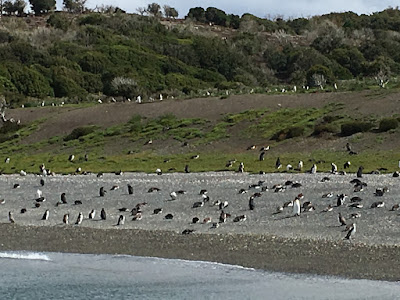 Now for the ride back! What started as a fun little tour, with lots of oohs and ahaha and a few giggles with the big swells, soon became a nightmare for those of us prone to motion sickness. Thirty knot headwinds + fourteen foot waves = a long way home. You knew something was up when the crew began moving all breakable concession items into a secure cabinet. Soon enough, they were escorting green-faced patrons from the front of the bounding catamaran to the back. The crew handled everything masterfully (this is not their first rodeo!) but the little white barf bags they passed out were completely unworthy of the task, so soon black trash bags were in play. Kleenex and paper towels were distributed by kind strangers and air fresher somehow kept pace. Children were shrieking, grandmothers were moaning, and the ride lasted FOREVER. I think I'm still moving...

Becky and I are not sure if it was worth seeing two LIFE BIRDS. Ask us tomorrow.

Our Hotel Tolkeyen is a welcome respite. It feels and looks like Jenny Lake Lodge in Grand Teton National Park, complete with three snow covered peaks and lupines out front. 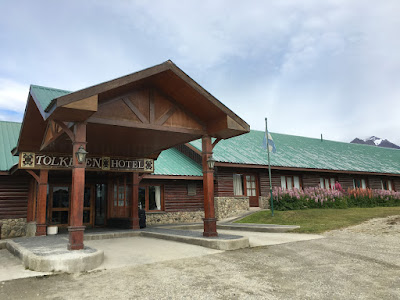 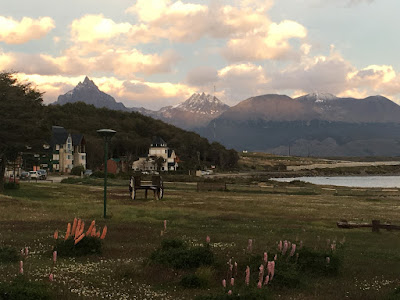 Jan 17
More birding, this time heading south into the Tierra Del Fuego National Park. It was great to be (mostly) out of the wind and walking. The ground is spongy and thick with moss, tiny ferns, grass, wildflowers, and forbs all competing to grow and bloom and bear fruit and set seeds in the cold, brief summer. Long days help. There are three kinds of somewhat related beech trees here, each one occupying a narrow niche based on soil moisture. There are tall deciduous Lenga, short deciduous Lenga (which is still plenty tall) and a few evergreen Lenga in the lower elevations. There are no conifers. Draped within the deciduous trees are bright yellow mistletoe and grey-green lichens. 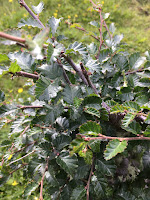 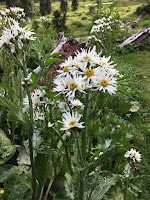 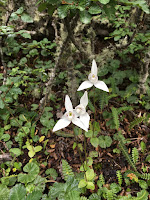 The understory has various thorny shrubs including barberry and heath, both covered with berries that support people and wildlife. Beneath the shrubs we saw orchids and daisies.

Birding was fun as we wandered in and out of small clearings which were left decades ago by prisoners who cut down trees for their firewood. The climate is so cold, stumps can remain solid as rock for 100 years. One clearing gave us great views of the Magellanic Woodpecker. 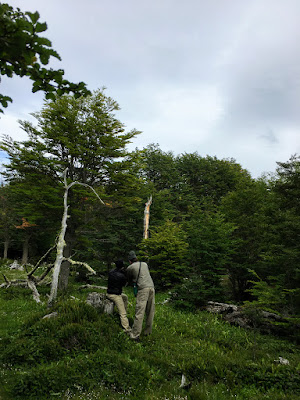 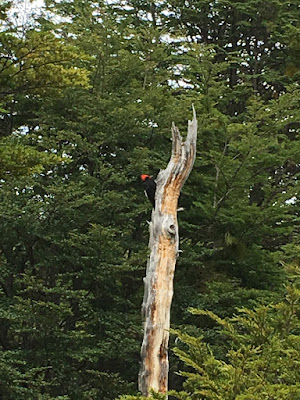 We had several more stops with short walks to either a lagoon or a creek bed, each one more scenic than the last. Rain would spit from time to time, but we always made it back to the car before getting too cold. One afternoon location even provided a good view of four Andean condors soaring above the snow-dusted mountains that would appear and disappear under clouds. 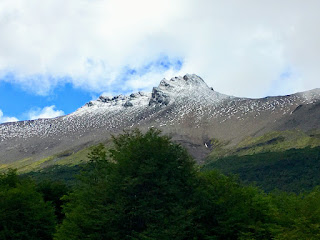 There is a reason that national parks are national parks. This area was stunning, with rocky creeks or foaming waterfalls...trails and boardwalks, quiet and beauty around every bend in the packed-dirt road. We saw some campers and hikers, and looming over everything, the massive Andes Mountains. 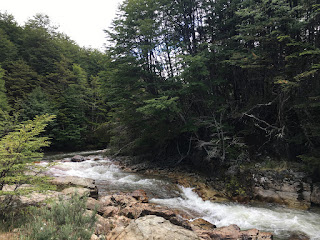 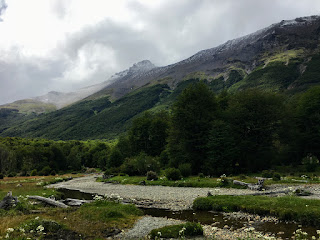 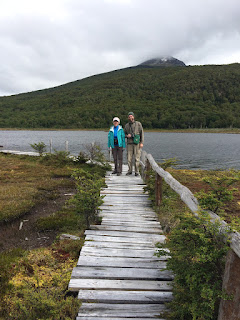 One or two finals stops; first, the city dump. Yes, every birder will tell you there is something easy to see there (as well as at waste water treatment plants). We got the white-breasted caracara, (as well as dozens of chimango and southern crested caracaras), along with about 500 kelp gulls. The sanitation workers would cover trash almost immediately to keep the ubiquitous plastic bags from blowing in the never-ending wind. Esteban said that Argentina has recently banned the bags!

Last, an airport! Not the commercial airport built in 1997, but the old airport now used for small planes and the flying club. It has a near constant cross wind and the Andes directly across the bay, the so the new airport was aligned to be parallel to the mountains and prevailing winds. We got a blackish oyster catcher and saw a model of a bi-wing Heinkel HD 24 flown by Gunter Pluschow, the first aviator to explore and film Tierra Del Fuego and Patagonia. Sadly, this model was missing its top two wings and even more sad, the pilot died in a plane crash in Argentina in 1931. 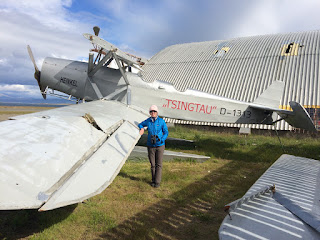 After dinner at our hotel, Becky and I were thrilled to get Jack's message that they are safely back on the ground in Marsh in St. George Island in Antarctica after crossing the 75 parallel! Yay!
Email ThisBlogThis!Share to TwitterShare to FacebookShare to Pinterest
Newer Post Older Post Home