After a nice three days in the very interesting Faroe Islands, it was time to continue our meandering trip home with a short hop (1+26 per the flight plan) from Vagar, Faroe Islands (EKVG) to Akureyri, Iceland (BIAR). This will be the second time to Akureyri for the Longs and the Marvils, so I was fairly comfortable with the airport even though it is another (like Vagar) airport tucked-in among mountains.

Departing Vagar was some interesting aeronautical decision making (ADM). My personal operations manual says I can’t depart an airport unless weather would permit a direct return to the departure field or there is a “take-off alternate” within 30 minutes flying time that has weather that would allow landing. A take-off alternate is not an option at Vagar as EKVG is the only airport on the islands and the closet alternate is well more than 30 minutes away. So, we needed landing minimums at Vagar in order to depart. 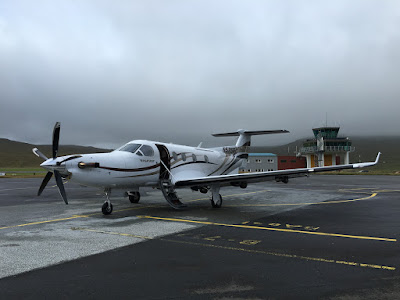 The AFIS was reporting 300 BKN which was below the landing mins for RWY 30 (which the winds favored slightly) of 425 FT AGL. However, it was one of those situations where the weather at the automated reporting station was substantially different than the other end of the airport. We could look to the south and see the tops of hills that were well above 425 FT AGL...as much as 1,000 FT AGL. Thus, we determined we could depart RWY 12 (slightly downwind, but well within limits) and return on the ILS RWY 30. 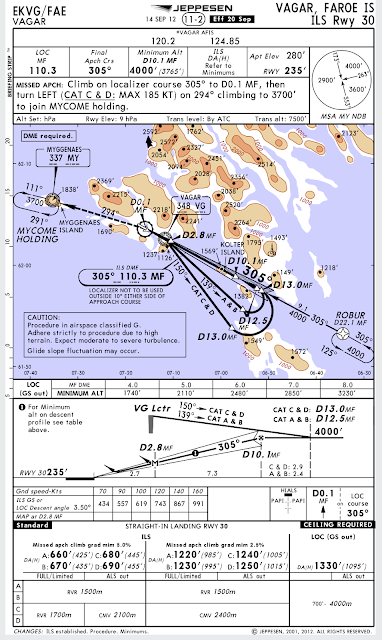 To complicate matters further, the departure procedures from Vagar are fairly vague. Two days prior we had a long discussion (even looping-in Jerry Seckler, the ultimate instrument procedure guru, back home) regarding the appropriate way the depart in low IMC. 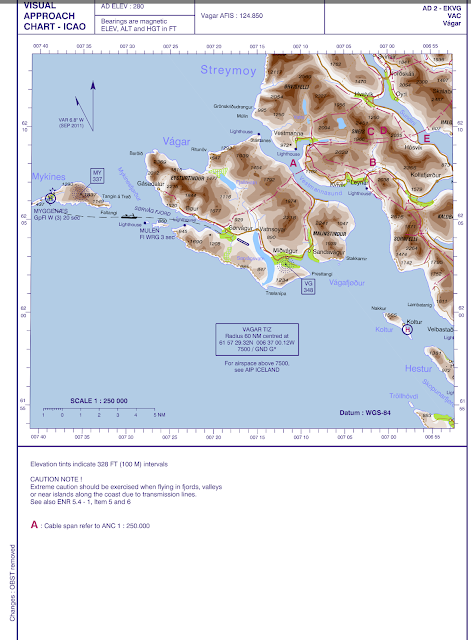 I guess the folks doing the IFR survey expected some level of common sense from pilots. Fair enough.

When we called AFIS for our clearance, they had nothing. Our handler called the "tower" (every good handler I have met has a direct number to the tower and knows the people that work there). The handler asked if we wanted to go up to the tower and file the flight plan directly? Heck yes! Unfortunately, for me, I had requested that a maintenance truck (from Atlantic Airways) come to the plane with nitrogen to service the tires (they looked a little low) and thus I needed to wait for the maintenance folks. So, Giuseppe followed our handler to to the tower and worked his magic on her and had the flight plan filed in a jiffy. He also asked her about the departure and she basically said, "Yea, just climb out straight ahead and it will be OK." Alright then. G-man got some great pictures from the Vagar tower (actually AFIS)...cool 360 degree photo from Vagar tower by Giuseppe...

After servicing the tires and getting everyone loaded, we started-up and back taxied down RWY 12 and departed. As we had estimated, we stayed VMC until about 1,000 AGL. For the departure, we had the back-course RWY 30 localizer loaded and I had originally planned to track it. Once airborne, I elected to fly visually until entering the clouds at 1,000 AGL because I could see that following the back-course strictly would put us closer to the hills than going a bit east of the localizer course. Upon reflection, if I had it to do over again, I would just have followed the back-course localizer the whole way because once we did enter the clouds, we were not on a well-defined route although it was perfectly safe. Wish they had had published instructions. Our approximate actual departure route in green... 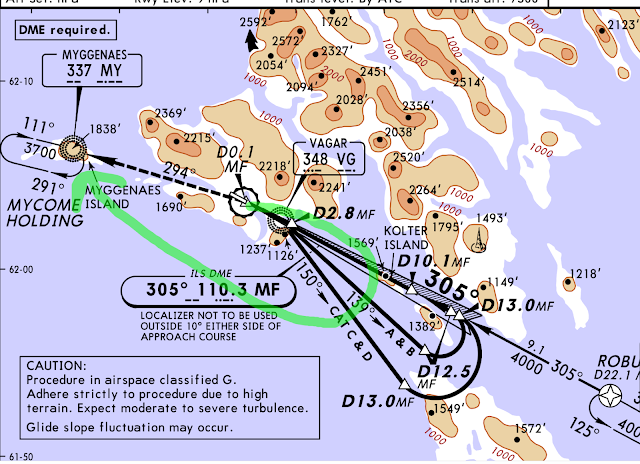 We broke out on top of the clouds by about FL60, contacted Reykjavik Control and continued the climb to FL260. The whole cruise portion of the trip was smooth and VMC. The route for the day was more-or-less direct to an IAF for RWY 19 at Akureyri which the forecast indicated would be slightly favored by the winds. That was great with me because we had landed RWY 01 in 2014 and it would be nice to see the scenery for the other direction. 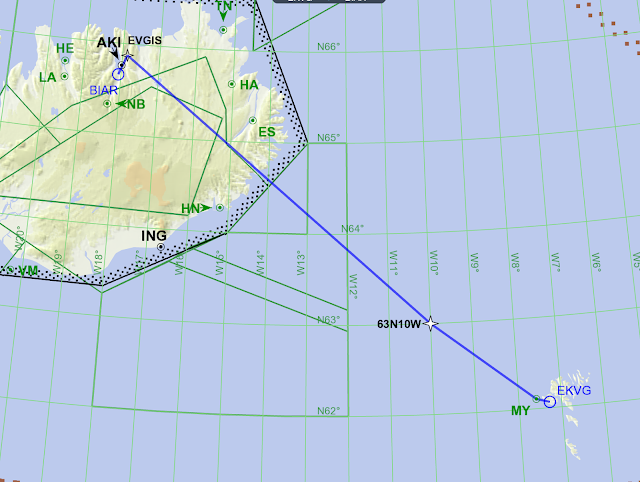 The GNSS approach to RWY 19 was a relatively straight-forward (certainly as compared to the absurdly complex LOC to RWY 01) except for a fairly long final approach in order to allow adequate time to descend over Eyjafjörður (the longest fjord in Iceland). 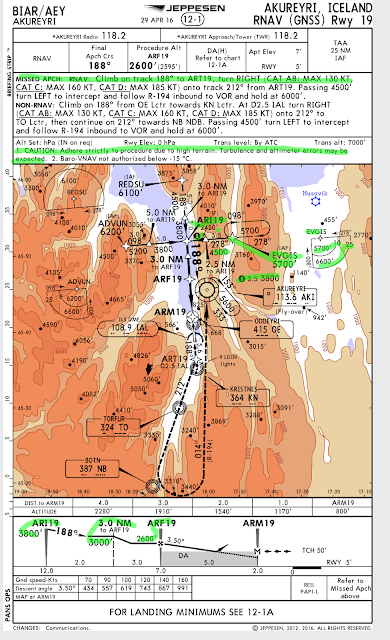 Some great views coming down the fjord and past Akureyri. 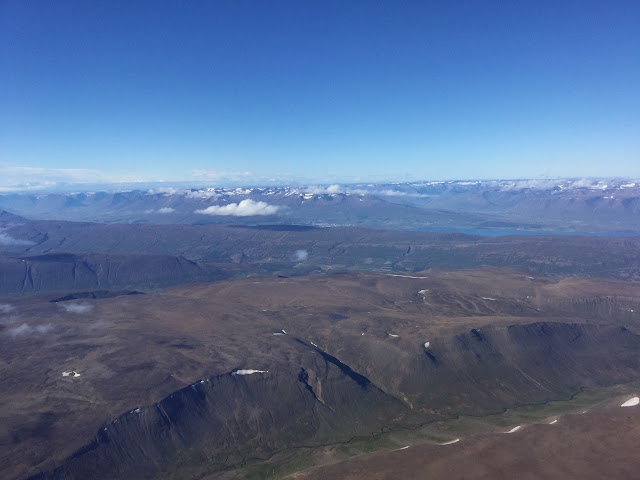 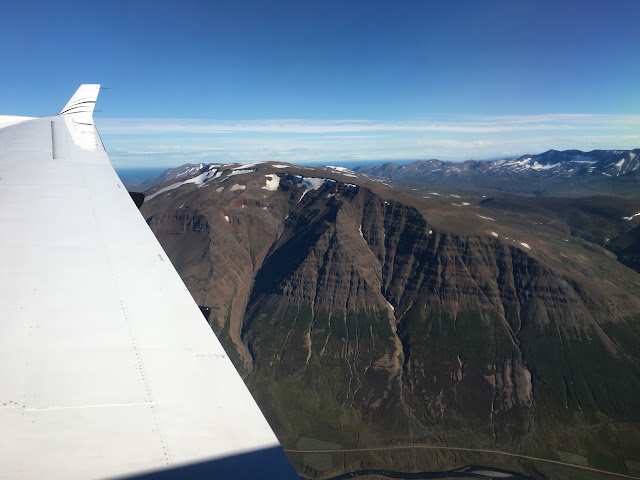 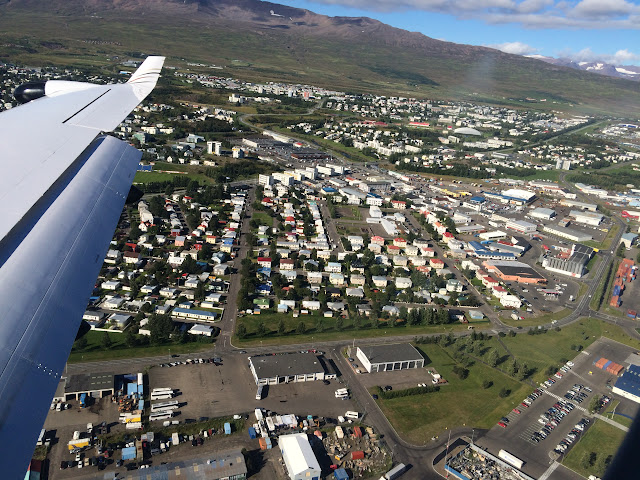 We landed right over the top of this very large cruise ship... 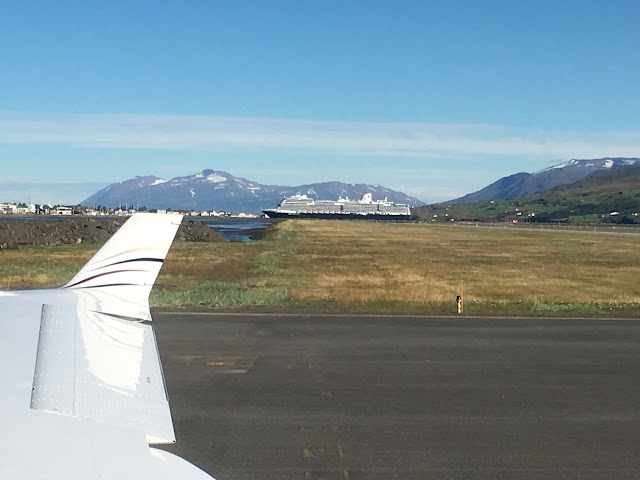 A longish video of the final approach to (by Giuseppe) ... 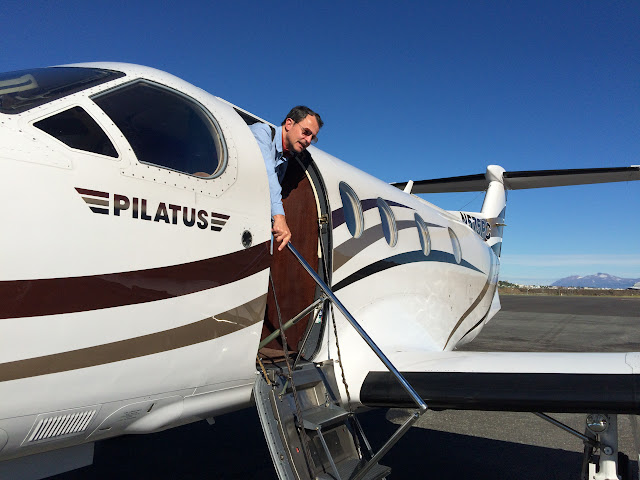 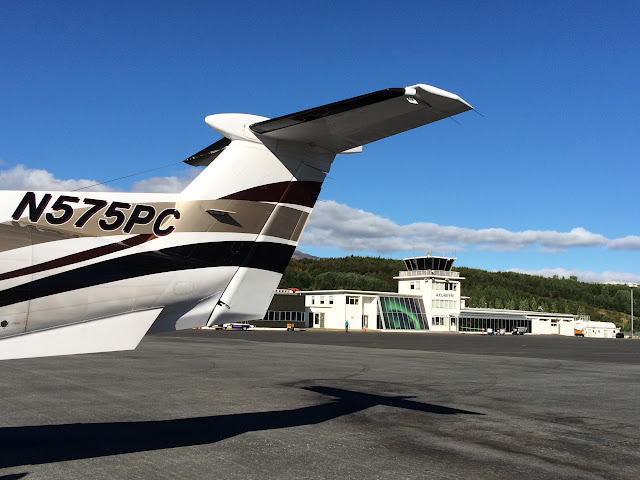 After landing, the handlers (Icelandic Airlines staff) greeted us and got us fueled quickly. There was absolutely no customs or immigration…we just walked right in.

Akureyri has a real air traffic control tower during the day that converts to an AFIS at night. After having a fun control tower visit that morning in Vagar, Giuseppe called-up the control tower at Akureyri and asked if we could come up to “discuss our clearance for the next flight.” We really just wanted to check-out the tower and get some photos, but the very nice tower controller said “Sure, come on up…” and she unlocked the tower door remotely.

We did ask her about the unusual clearance we’d be requesting for on the next flight (the one that arcs up to 75N) and she gave us the phone number of the flight planning desk at Reykjavik Control and said they would be able to help us (which they did). But, the main event was touring the tower and getting some photos. 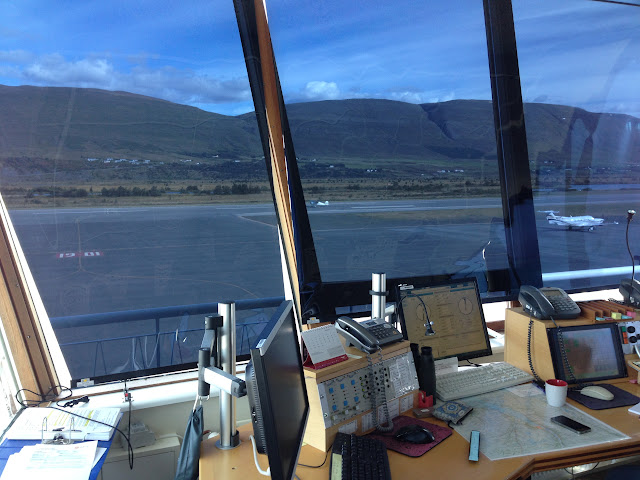 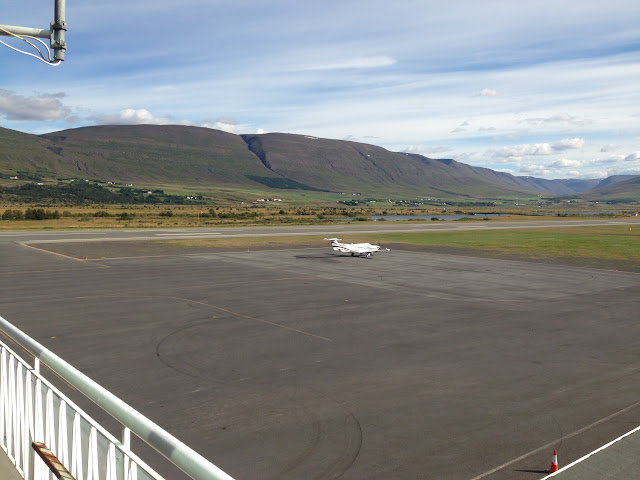 A short video from the deck outside the BIAR tower...

Later in the day we toured another very cool aviation museum on the field which I highly recommend for any pilot nerds in the area.

We’ll pick-up the story for the next leg to Ilulissat, Greenland via 75N. This will be the “money” leg in terms of meeting the Polar RTW requirements.
Email ThisBlogThis!Share to TwitterShare to FacebookShare to Pinterest
Newer Post Older Post Home