Today was the last day of our "sprint" to Africa from Austin, Texas and was the first leg that was entirely new to us.  The flight was non-stop from Santa Maria, Azores (LPAZ) to Praia, Cape Verde (GVNP).  As planned (not necessarily direct), the flight would be 1,405 nautical miles (NM) or 1,615 statue miles (SM). 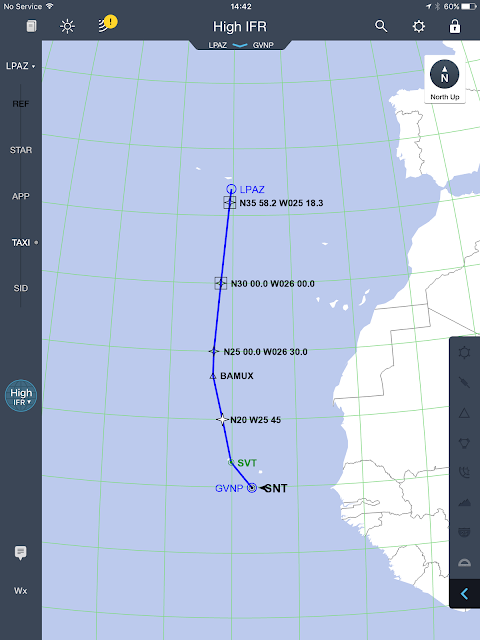 After two days with some challenging weather conditions we were hoping for an "easy" day with clear and smooth skies the whole way south. While the weather the on south two-thirds of the route was great, there were some isolated cumulus build-ups for about the first third of the flight. However, the pre-flight weather breifing indicated the build-ups were spaced enough apart to allow us to either zig-zag around them or even over-fly some of the smaller showers.

Again, we slept-in a little later than normal since our whole trip schedule was offset by the two hour delay leaving Austin on Day 1. Plus, while today would be a long flight, it was non-stop thus the total departure to final destination time was reasonable (less than seven hours).

Arriving at the airport our handler greeted us again and escorted us to the plane which looked pretty lonely being the only airplane on a large ramp. Not sure how well a panorama photo will work in the blog, but try clicking on it.

With the morning light, N575PC looked nice (to me, anyway) and was raring to go. 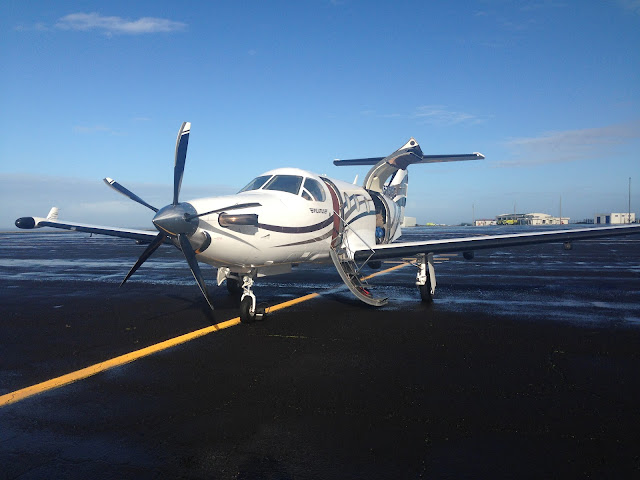 The weather in the immediate vicinity of the airport was nice and taking-off into the early morning skies was beautiful.  Carolyn captured a nice video of the take-off.

Some other shots from Becky... 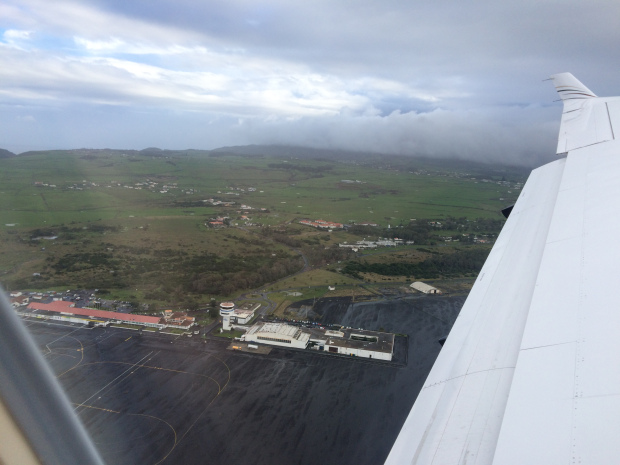 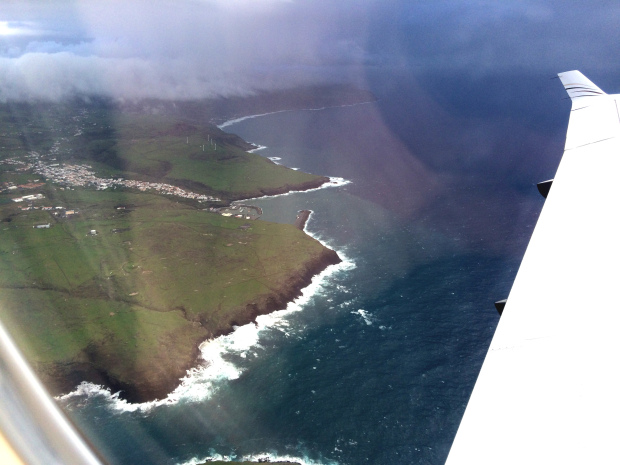 Once airborne, we climbed directly to FL290 (approximately 29,000 feet) and within a few minutes were seeing the expected building cumulus clouds. Some we could fly over, but some were well above our altitude and required deviations. 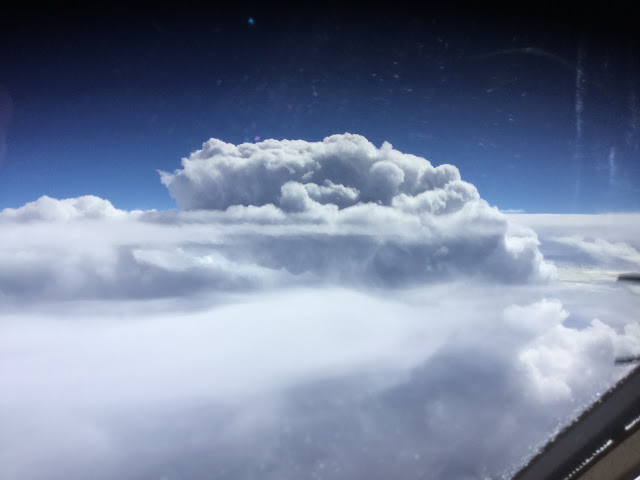 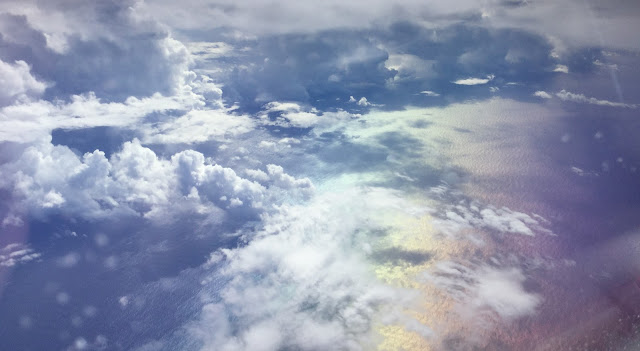 For the most part, we could see the clouds to avoid with our eyes, but we still used the on-board weather radar and lightning detection equipment to confirm.  On-board weather radar is very comforting to have in the vast majority of the world that does not have ground based weather radar much less the ability to upload such radar images via satellite to airplanes. You need to depend on your on-board equipment.

When oceanic and out of radar contact, weather deviations are handled differently than in the States where we normally ask for a heading (X degrees left or right) to avoid weather. When out of radar contact, the process is to ask for X miles left or right of course. Then you use the parallel track function of your navigation system to set-up a course parallel to the planned route. You can see the offset route and the planned route below with the "PTK" in the lower left-hand corner indicating we were on a  parallel track. 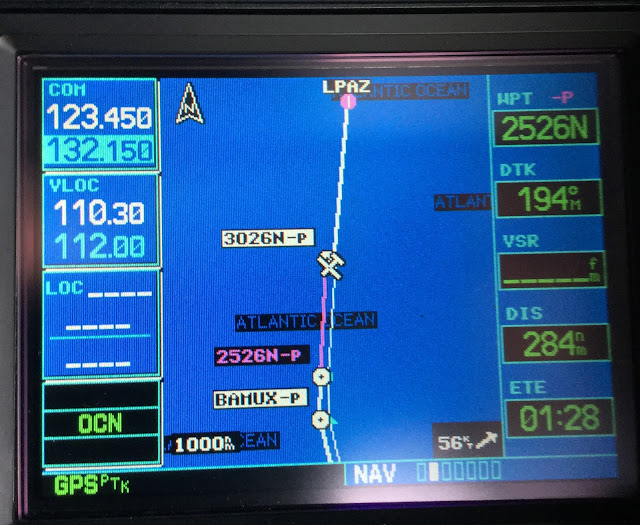 The headwinds for the flight were much stronger than average for this time of year (based on ARINC historical winds aloft data) which extended the already long flight to 6.5 hours. But, once done with the deviations right after departure, it was an easy and smooth flight.

Very soon after departure we had requested a climb from FL290 to FL300 to give us better visibility of of the weather, but it was denied. However, about two hours later they approved it and we made the climb to our plane's maximum allowed operating altitude. 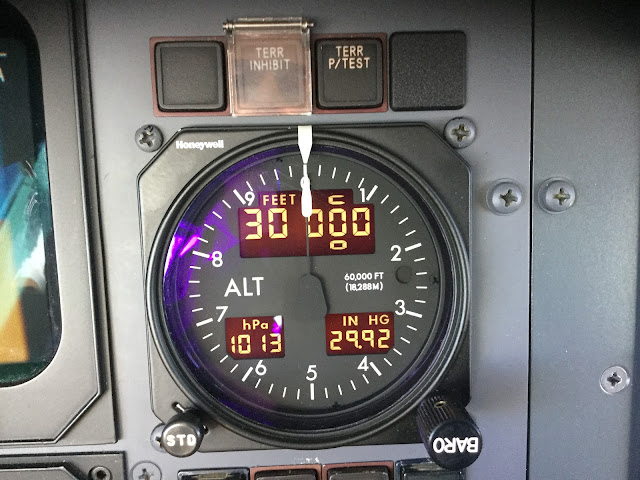 Normally a thousand feet one way or another doesn't make much difference, but for a short period today it did. Cloud deck just below us while we were at FL300... 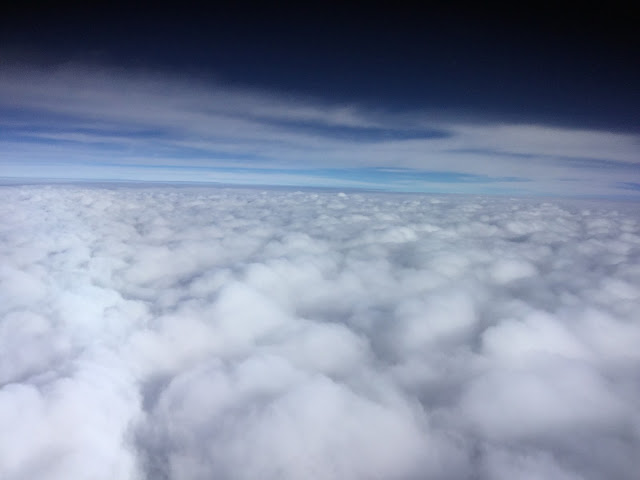 The arrival into Praia, Cape Verde (GVNP) was good weather other than a bit of haze. We made a visual approach flying directly over the airport and then a right downwind for landing. Final approach... 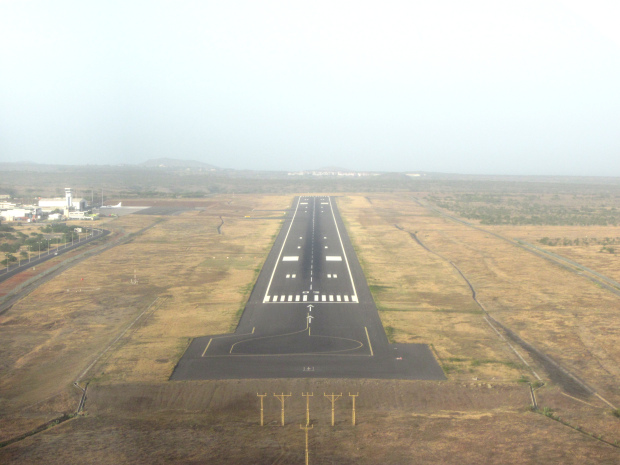 On the ramp at GVNP, Nelson Mandela International Airport. Welcome to Africa. 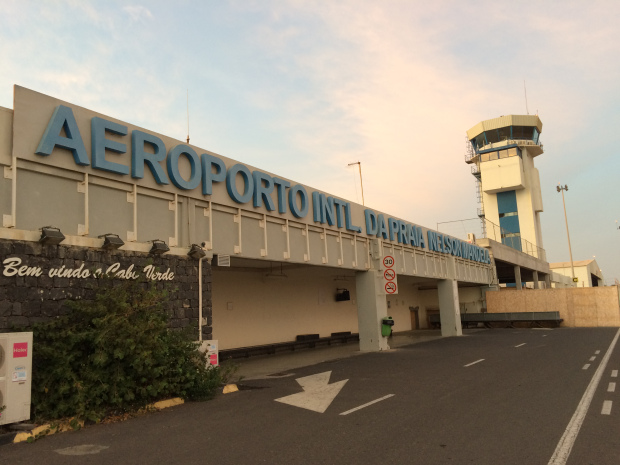 For some odd reason the fuel truck operator had to stay with the truck while fueling, thus the crack team of Josh and Giuseppe put their combined total of about seven college degrees to work... 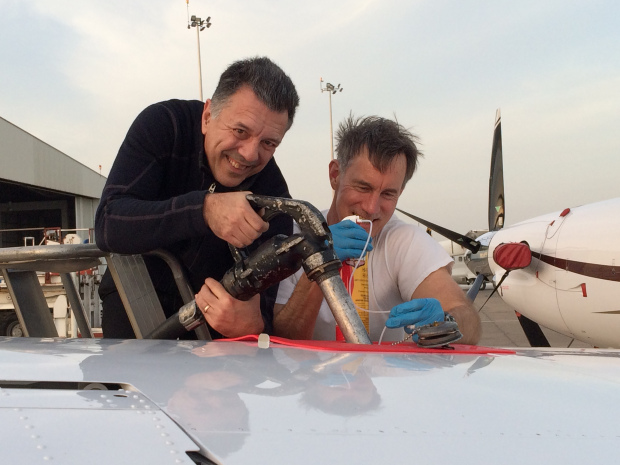 After three consecutive flying days, the pilots get a day off tomorrow before departing (without the ladies) for Accra, Ghana. I think three days of consecutive flying 5+ hours a day internationally, even with three pilots, is about as much as we should do.  We were all ready for a day of R&R. None of the flying was that tough, but you are concentrating all the time trying to think of every possible contingency.

Next flight is over the heart of Africa...seven countries in one flight.